Even though we may not be sure who is collecting your browsing history, most of us are already aware that someone, somewhere knows exactly what we’re interested in buying.

Cookie profiling, also known as web profiling, is the use of persistent or permanent cookies to track a user’s overall activity online. This doesn’t just happen when you’re on a particular website – it’s going on the whole time you’re browsing the web.

Cookies work as a tracking mechanism to identify your computer and log a user’s activity when visiting pages online. Whenever you browse a website for a product, that website will store the items you’ve viewed and create a profile for you based off of your interests.

But that’s only just the beginning.

Online advertisers also know your name and contact information, demographics, income, recent life events such as getting engaged or having a child and much more. That’s how one father unfortunately received a letter from OfficeMax addressed to “Mike Seay, Daughter Killed in Car Crash”.

Instances like this prove our personal information is being widely distributed online without our consent. Even companies like Experian, a credit reporting bureau, can sell lists of new parents and homeowners to advertisers.

Some are calling out for the criminalization of data misuse due to privacy violations, though companies will argue that enabling cookies on your browser gives them consent to target you. They’ll also insist that they use numbers, not names to identify individuals – yet it’s only getting easier to be profiled with anonymous tracking information.

And the worst part is:

Have you ever almost made a purchase in an online store, only to see that item stalk you in an advertisement a few days later, maybe even at a discount? Annoying as it may be, it’s a super-effective strategy to get you to spend money.

According to the 2014 VWO eCommerce Survey, more than half of all online shoppers were more likely to buy an item they previously abandoned if they were offered it again at a discounted price. 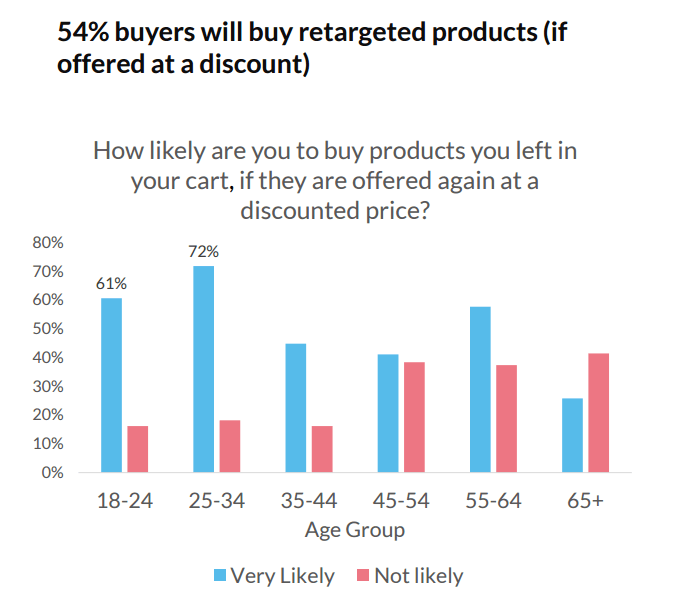 Apparently 54 percent of us are willing to sacrifice our privacy for a good deal, even if it’s something we decided we didn’t want before. That’s alright, we can’t be blamed for wanting to save money, right?

What we can be blamed for is wanting to see targeted advertisements more than random products and services. The chart below shows that the majority of users would rather see targeted ads or a combination of both. 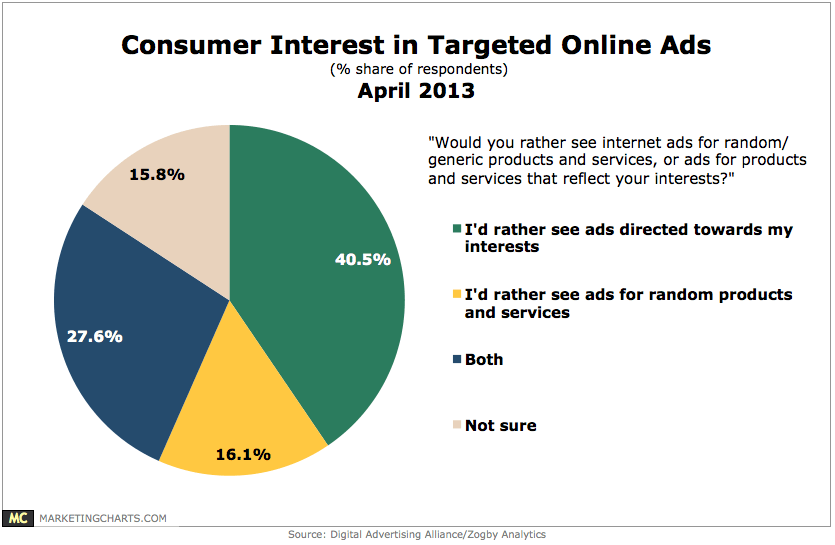 And targeted advertising is only going to get creepier from here.

So creepy in fact, many new marketing concepts sound like they were hatched in a brainstorming session for a science fiction movie. But the concepts of today are the privacy-invading sales tactics of tomorrow, and we want you to know what’s coming. Here are five of the most Orwellian advertising ideas coming soon to an advertiser near you.

1. Mannequins Will Watch You While You Shop

As if mannequins weren’t eerie enough already, new “smart mannequins” have the ability to send beacons right to your smartphone. The mannequins are programmed to send notifications of the store items they’re wearing just as you walk past them.

:
Other smart mannequins have even more advanced capabilities. An Italian mannequin maker is developing dummies that watch you while you shop to collect marketing data. And behind that blank face is a machine that can determine your age, gender, and race.

The mannequin is appropriately called EyeSee, because it has cameras for eyes and is always watching you. If you’re wondering why stores would want to use such a nightmare-inducing product, Bloomberg reports:

“The mannequin led one store to tweak its window displays after revealing that men who shopped in the first two days of a sale spent more than women, according to Almax. Another store found that a third of visitors using one of its doors after 4 p.m. were Asian, prompting it to place Chinese-speaking staff by that entrance.”

But don’t worry, current regulations require stores to put up signs so you’ll at least know you’re being watched.

2. Store Surveillance Cameras Will Learn To Recognize Your Face

This surveillance camera has the capability to search through 36 million faces in just one second. Rather than using image processing technology, it uses data given directly from the camera to match certain features.

It does have some drawbacks – customers have to be close to the frame facing directly for the image scanning to really work. But it does have the potential to eliminate hours of scanning surveillance footage to find a specific person, such as a theft suspect.

If you don’t want stores to recognize your face, there’s a solution. People are already coming up with ways to paint makeup on their faces to thwart facial recognition cameras. It’s called computer vision dazzle or CV Dazzle, and it’s probably going to be the next big style trend in the year 2025.

3. Get Instant Deals By Letting Stores Tap Into Your Facebook Photos

You walk in to your favorite hotspot. This camera greets and scans you as you pass by, then notifies you that you’ve got a new deal. It’s kind of like Groupon, but for your face.

These cameras use facial recognition technology that is paired with your Facebook photos, after you authorize it from the Facedeals app. After that, it checks you in to that location and uses your “like” history to suggest new local deals.

The project’s website claims Facedeals removes the guesswork performed by both businesses and consumers. Rather than waiting for promotions, shoppers can visit their favorite stores and expect to get discounts.But personally, I’d rather use a regular old coupon – no face scan needed.

4. Billboards That Show You Personalized Advertisements As You Walk By

Back in 2012, a charity known as Plan UK launched their ‘Because I am a Girl’ campaign – which highlights the plight of the world’s poorest girls. Its focus is to get both men and women to pay more attention to the fact that women across the world are denied choices and opportunities due to poverty and discrimination.

Their billboards had a unique way of snagging attention – facial recognition cameras could determine whether the passerby was male or female and would show a custom message. Women would see a 40 second video with facts about the issue, while men are only shown a link to the charity’s website. 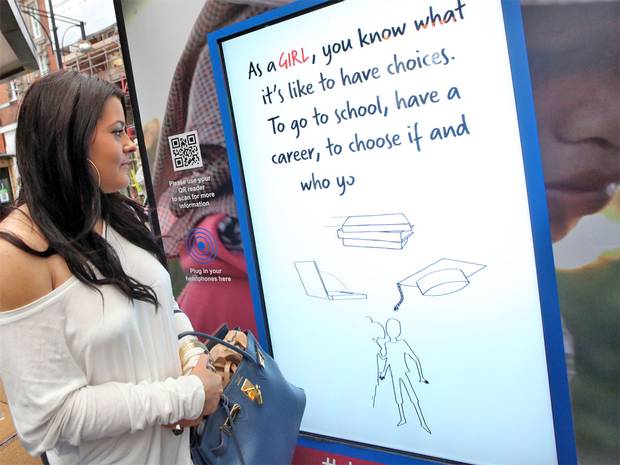 The message carries through in this genius (yet somewhat intrusive) form of advertising, as it was successful in inspiring both men and women to think about gender equality. Using facial recognition to target certain segments of people could be the average way billboards suck you in 5-10 years from now.

Advertising Will Be Literally Everywhere With The Oculus Rift

The Oculus Rift is a premier virtual reality gaming system that very well could redefine gaming as we know it today. Rather than being confined to a TV screen, the Oculus Rift opens up an entire world for you to immerse yourself in.

Just don’t get too excited yet, as highlighted in this article from Gizmodo, so far the future of virtual reality is just lame ads.

Mountain Dew has been developing virtual reality “experiences” that use athletes and 12 GoPro cameras to create 360-degree video for the Oculus Rift. Users can try on the headset and take the place of a pro skater or snowboarder and view the full surrounding experience in high definition video.

Many other companies are also jumping on the virtual reality train to take advantage of the Oculus Rift’s advertising capabilities. Facebook is behind the reigns of the company and has a goal to have one billion virtual reality users after the official launch in 2016.

Considering the Playstation Network, the gaming platform with the largest number of users, has only 110 million – it’s obvious that Oculus Rift developers have more than just gaming in mind for the device. Whatever immersive advertising experience we have to look forward to next with the Oculus Rift, we can at least hope for a “skip” button.