Note: You want to host in a data center that values security and privacy just as much as Google does. Read more about how many digital and physical security measures NetHosting has implemented to keep your data secure.

Google lost a Pluto network switch in Iowa. The device was returned but the Internet got a rare chance to look into Google’s inner workings.

We’ve talked about before how tight-lipped Google is, not just about where their data centers are located but what software they build and what hardware they innovate to make theirs the fastest search engine online. So when a piece of Google hardware goes to the wrong address in Shelby, Iowa, you could imagine that the company is eager to get it back. 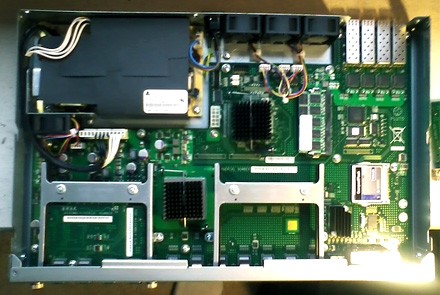 In late February, two technical professionals posted pictures of a piece of hardware that arrived at the door of their place of business on accident. It was never specified what these forum posters did for a living, but because their posts were on a networking forum, they are believed to be knowledgeable about computers, servers, and networks in general. Although it looked unlike any other switch the forum responders had seen, many identified it as a network switch. For the unfamiliar, a network switch is a physical device that allows machines plugged into it to exchange data.

Printed on the actual device was the name “Pluto switch.” After some detective work from the gentlemen that received the switch, they determined the network device to be one of Google’s, who also has a facility in Shelby, Iowa. The detective work was more intensive than you would guess at first, because the switch didn’t behave like any other network switch they had used before. On the back of the device was something written in Finnish.

Note: Google is known for pushing the boundaries of technology. We’re no Google, but NetHosting works just as hard to deliver the very best to our customers. Take a virtual tour of our data center to see how.

The original finders posted pictures of the device on the forum from all angles, including a picture of the Finnish writing on the back. After the duo posted that they determined the device to be from Google, forum responders started offering to buy the switch. However, the two men decided that Google would probably be missing their switch. It took multiple attempts to get on the phone with someone from Google who would take them seriously, but they reported back on the thread that once they finally found a network engineer to talk to, the engineer said that Google definitely wanted the device back, and would send the men exclusive Google t-shirts.

After talking with an engineer, the original forum poster explained that he tried to learn more about the Pluto switch but the Google employee refused to divulge any information about the device. Again, this speaks volumes about the lengths Google goes to, to make sure their own hardware is private and better than the rest of their competition’s hardware. For ten years now, Google has been building its own hardware, although many debated about whether the company would make its own network gear or not. Apparently, with the finding of the Pluto switch, we could safely guess that the company does in fact make its own network devices, in addition to its own server hardware, and writing its own server software.

Although not much information was divulged about how the device works or how Google implements the Pluto switch, it was a rare peek at something that rarely ever gets to see the outside of a Google data center. Additionally, it will be interesting to see how more public technology, like switches from Cisco or other manufacturer’s switches, might move forward based on the reverse engineering of a few photos from a networking forum months ago. For example, when Google started customizing multiple aspects of their own data centers, companies like Facebook, Amazon, and Microsoft started following their example to make more efficient and effective hardware for their customers.

To read more about customized hardware, read about third-party custom server makers that are giving big name OEMs like HP and Dell a run for their money.