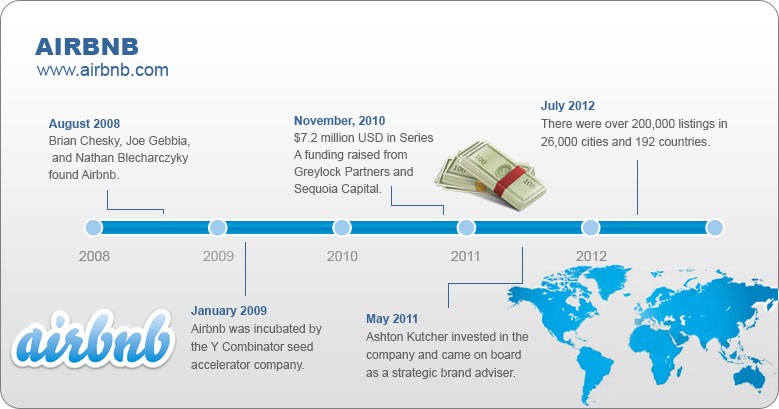 Airbnb.com is disrupting the hotel industry by letting property owners advertise available space for vacationers to rent for a limited amount of time.

Airbnb is a young startup company located in San Francisco that aims to bypass expensive, impersonal hotels by uniting those who want to rent out living spaces with those who need a place to stay for a night, a week, or a month. Prices vary as much as the rentable locations, which can include private rooms, tree houses, private islands, whole houses, boats, and more.

In 2007, Airbnb co-founder Joe Gebbia called Brian Chesky and invited him to come live in his house in San Francisco. Impulsively, Chesky agreed and upon arriving, realized he had no money for rent. So to supplement their incomes, the duo advertised their living space as a bed and breakfast for visitors to an international design conference happening in San Francisco that weekend. The idea spread among conference attendees, how nice it would be to stay in a more affordable place with hospitable natives to the city that could give a more authentic experience to visitors. Nathan Blecharczyk jumped into the mix as another co-founder to help Gebbia and Chesky code a website for the idea.

During the popular music festival, SXSW, in August 2008, Airbnb.com helped hundreds of people find places to stay, and then during the Democratic National Convention that same year, it helped over a thousand people find a place to stay. After that, Airbnb.com started to gain more users, more funding, and more notice on the Internet. In 2009, the company worked with Y Combinator to get more seed funding and advice on how to grow their business. Later that year, the original URL Airbedandbreakfast.com was shortened to Airbnb.com. Finally in 2010, the group was able to move out of the founders’ apartment and into their first office space.

$7.2 million USD was raised in late 2010 for the site by Greylock Partners and Sequoia Capital, two well-established venture capital firms. The site only continued to grow from there and on February 24th, 2011, Airbnb booked its one millionth guest. In just one month (from January to February 2011), Airbnb saw a revenue increase of sixty-five percent.

The popular startup even garnered the attention of celebrity investor Ashton Kutcher, who put an undisclosed amount into the company in May 2011. Airbnb grew large enough to purchase a German version of its service, called Accoleo, and serve more international clients. As of July 2011, the company had $112 million USD at a $1 billion USD valuation. Since then, the site has only continued to grow and receive more praise and recognition, with over 10,000 million overnight bookings and 200,000 listings all over the world in 26,000 cities and 192 countries.

Anyone interested in booking a night or longer at a location can search on Airbnb.com by location, price range, max occupancy of the accommodations, and the dates you’d like to be traveling. Again, accommodations can range from boats to tipis to apartments to mansions. The prices of these places range anywhere from $10 USD a night to $5,000 USD a night, and every price point in between. Airbnb also offers an onsite messaging system so you don’t have to track down email addresses or phone numbers, but can ask the host a question directly through the site.

When you’ve picked a place and a date that you’d like to stay over, you enter your credit card information on the site and the host can choose to accept or deny your request in the subsequent twenty-four hours. Hosts and locations are rated by travelers, but travelers are also rated by hosts. All ratings are viewable by others on Airbnb.com. All of these features are also available on Airbnb’s iOS and Android apps.

Hosts can list their locations on Airbnb.com for free. They just have to pick a price for an overnight stay, upload photos of the accommodations, and list when the place is available. Twenty-four hours after a guest checks into the location, the host will receive payment from Airbnb. The delay was put in place after some hosts reported damaged property from guests. Additionally, Airbnb now offers hosts a $50,000 USD guarantee, a twenty-four hour hotline, and a dedicated team to investigating any complaints from hosts or travelers.

Shortly after Airbnb started in 2008, the company moved its site to Amazon Web Services from a smaller hosting provider that didn’t allow flexible service administration. Speaking of moving to the cloud, Nathan Blecharczyk (co-founder and CTO of Airbnb) said, “It was great to be able to ramp up more servers without having to contact anyone and without having minimum usage commitments.”

In the past three years, Airbnb has grown a lot. To facilitate that, the company uses 200 Amazon Elastic Compute Cloud instances for all of its application, memcache, and search servers. The company is also using Elastic Load Balancing, and processes more than fifty gigabytes of data daily. To handle all of that data, the company also uses Elastic MapReduce. For backups and storage, Airbnb uses Simple Storage Service from Amazon as well. Currently, the company is storing about ten terabytes of user pictures. Finally, to monitor everything in their system setup, Airbnb uses Amazon CloudWatch.

Instead of sticking with its MySQL server, Airbnb moved their databases to the Amazon Relational Database Service and handles much of its database work through the Amazon API and the Management Console. While Amazon’s services may have many benefits, Alexa.com reports that 77% of websites on the Internet load faster than Airbnb.com, which takes 2.352 seconds to load. That may seem fast, but when microseconds can cost companies thousands of dollars in revenue, long load times become a deal breaker for consumers.

Airbnb has received more and more attention in the recent past, for being an up-and-coming app that facilitates easy and affordable travel for consumers all over the world. Many predict the company will become a multibillion dollar startup in the future, like Quora and Dropbox. From the spontaneous beginning of the project to its current success, Airbnb has been helping its users get an inside and cost-effective look at cities and locales around the globe. Stories like Airbnb’s show that this is truly the age of the startup in the tech industry.

Upbin, Bruce. “Airbnb Could Have More Rooms Than Hilton By 2012.” Forbes.