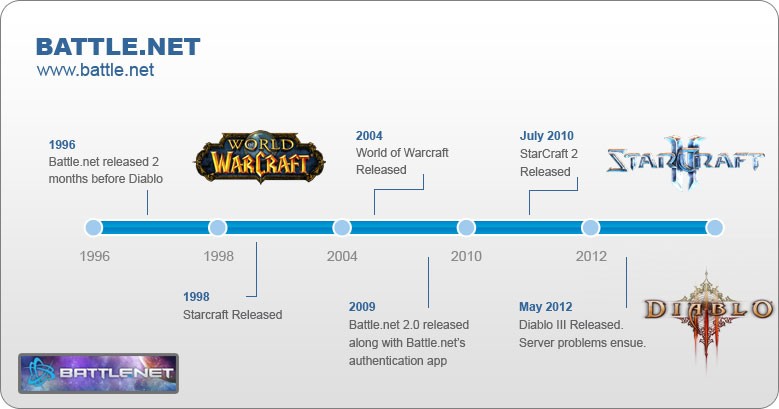 Battle.net is an online gaming platform which hosts millions of Blizzard Entertainment gamers across the globe.

Battle.net is the online plane for Blizzard Entertainment gamers to come together and play against one another. Home to several of the top selling and most played games in history, Battle.net claims millions of international users plus the largest PC gaming environment. Undergoing a recent massive renovation, Battle.net is becoming steadily more integrated into gaming platforms, as illustrated by Blizzard’s newest release of Diablo III, which can only be played on Battle.net even for single player gameplay.

Battle.net was launched in November 1996, two months preceding the release of Diablo I in order to facilitate the multi-player interaction and to control cheating and hacking. Battle.net is said to be the key to Diablo’s initial success. Since Diablo was released December 31, missing the Christmas rush, one would expect sales to be fairly low. But because Diablo was so innovative and users could interact with each other over Battle.net, it became ground breaking and rose to be the best-selling game in 1997.

Starcraft stole the markets again in 1998 and became widely played between gamers around the world on the Battle.net networks. It wasn’t until World of Warcraft came out that this online arena became lucrative. Upon its 2004 release, World of Warcraft took the video game market by storm like no other game had. On several continents, including North America, Europe, and Asia, it fast became a sensation. The only service that outnumbered the users of World of Warcraft was the cumulative Battle.net users playing other games. Since then, Blizzard receives approximately US$1.7 billion a year in gross profits from World of Warcraft. Without Battle.net, World of Warcraft wouldn’t be where it is today.

Thirteen years after the release of Battle.net, Blizzard remodeled the religiously used platform to become more streamlined and user friendly. What it became was a more personal and interactive environment for gamers. Each account was attached to users’ email addresses and the implementation of new communication features helped smooth interactions between friends and opponents. Along with the new version, Battle.net released an authentication app for the iPhone.

Everything hasn’t been peachy for Battle.net lately however. On May 15, 2012, millions of fans of all ages downloaded or installed Diablo III to their computers, logged on to the mandatory online play, and were severely disappointed to find the long awaited Diablo III experience filled with lag, disconnects, or no connectivity whatsoever. To add insult to injury, hundreds of users’ accounts were hacked or stolen by rogue players. On May 18, Blizzard restarted the Battle.net servers and was scrambling to bring the servers back into working order to manage the gigantic flow of gamers while cracking down on hackers.

Battle.net does not require a subscription fee to play most of Blizzard’s game titles except for World of Warcraft. As mentioned above, the platform was created to better monitor and manage online play and cut down on cheating, hacking, and even unruly players by providing a system which could be easily updated and where patches could be quickly installed.

The most recent Battle.net (Battle.net 2.0) claims to have become much more “user-friendly, more consistent, and [a] more fun online experience for Blizzard gamers.” One of the biggest problems version 2.0 should solve is “match making.” Players were having a hard time finding appropriate opponents in online play. Newcomers would be utterly and fantastically defeated, or “pwned,” by seasoned veterans. The newest version gives players rankings according to previous online play and will be assigned into groups that offer a more comfortable or challenging gaming experience, depending on the player’s experience.

Much like its Valve counterpart, Steam, users can now purchase games directly from the Blizzard online store and download them onto their personal computers. These games, once purchased, can be downloaded onto any other computer. Users can also store gameplay information into the Battle.net systems.

Another major feature Battle.net has to offer is a better connection between players and friends. Battle.net links its account to the individual players email address which helps verification and can help manage friends. Battle.net gives users a “battle tag,” a nickname such as elitehobo732 in order to connect with online friends across the Battle.net network. Users can also decide to disclose their “real ID” (i.e. their legal names) and connect with people on a more personal level. Real ID friends are also able to see all of the gamers’ characters and stats. Cross game communication is also possible; gamers can speak with one another even if they are not playing the same game.

Although Battle.net has recently run into its share of obstacles (e.g. the Diablo III botched release), it is nonetheless the largest online video game community that is bringing gamers together on completely different continents. Considering its recent updates in version 2.0 as well as its strategic integration with single player gaming, the future of Battle.net looks bigger and brighter than ever before.

“History of Blizzard Entertainment.” Reference for Business.
http://www.referenceforbusiness.com/history2/17/Blizzard-Entertainment.html. (May, 23, 2012)