Note: While services such as Dropbox and Sky Drive will store your private data in the cloud, NetHosting will host your website in the cloud. Get even higher flexibility and efficiency for your business by switching to cloud hosting.

Millions of people are turning to the cloud to store or backup documents, music, and photos. Now some big name companies are competing for your storage! Let’s see how they size up.

The days of data sticks slung around your neck or attached to your key rings are coming to an end. Enter cloud storage, the virtual, portable hard drive. Dropbox blazed the trail and set precedent for cloud storage in 2008. Since then, millions of people have been purposefully leaving their flash drives behind and using various cloud storage services to save their important data and still have access to it from any location. 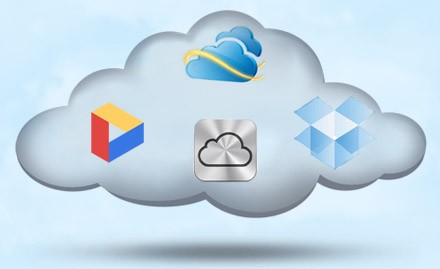 As this trend grew, companies such as Apple, Microsoft, and most recently Google began their own services, implementing their cloud storage and information backup into their operating systems and mobile devices. Now a brand new form of competition has begun; storage wars. Who can offer the most online storage for the best price or even for no price? Let’s meet the contenders, but more importantly, let’s get ready to rumble!

Dropbox is the seasoned contender, the pioneer of cloud storage. Offering a basic 2GB for free, Dropbox stands alone from any operating system or email service. Dropbox is universal with apps for every OS and mobile device. Users can upgrade their memory paying $99 a year for 50GB and $199 a year for 100GB. Dropbox seems to be everyone’s friend and is not in any direct competition with any particular service.

In another corner stands iCloud, offering 5GB of storage. iCloud has had a rough start. Apples first endeavor into cloud storage was MobileMe which brought only headache to Apple and its users. With bugs, crashes, and a relatively high price, it was not too mourned when Apple announced it would be doing away with MobileMe and would move all users to iCloud.

What has some people anxious about the move is upgrading their systems. So far iCloud is only available on OS X 10.7 a.k.a. Lion and iOS 5 users. Apple, in their classic generosity, is offering users who are not running on OS X 10.7 a free upgrade to the Snow Leopard, OS X 10.6, and from there users can pay US$29.99 to upgrade to Lion. Users will be able to keep their email address, email, contacts, calendar, and bookmarks. But all other files must be moved manually to local storage before the lights go off. Tenants of iCloud will also have to get a little cozy going from MobileME’s 20GB of space to iClouds free 5GB.

iCloud is also an Apple-only exclusive club. Nothing from Microsoft Office or Quicken backups can be stored there. Users can also purchase increased storage, 10GB is $20 a year, 20GB is $40 a year, and 50GB is $100 a year. Of the contenders, iCloud seems to be the most aggressive, just recently banning any iOS app with Dropbox integration.

Posed in the next corner is Microsoft’s answer to cloud storage, offering 7GB free memory, Sky Drive. Sky Drive could have trumped all of the other cloud storage services in its initial free storage space, originally promising 25GB. But at the beginning of April 2012, Microsoft announced it would only offer 7GB.

Sky Drive takes a page out of iCloud’s book and is going to integrate heavily with the up and coming Windows 8 OS and takes another page out of Google’s book and will allow users to create, share, and edit documents anywhere using web browsers. Users can also upgrade their storage from the entrance 7GB to 20GB for $10 a year, 50 GB for $25 a year, and 100GB for $50 a year. Of all the different clouds, Sky Drive seems to have the best deal, offering substantial space for a good price.

Note: Microsoft’s newest push towards cloud computing means great things for both those who want to build their own cloud architecture and for hosts that provide cloud infrastructures. Take a look at what benefits NetHosting already offers in terms of cloud computing.

Standing in the third corner, arriving a little later than iCloud, is Google Drive with 16GB of free storage to offer.

Google Drive has just recently entered the cloud storage brawl and has quite an advantage. With copious amounts of Gmail account holders, a growing Google+ user base, and the acquisition of major online organizations such as YouTube, Google has copious amounts of storage to bring to the fight and know how to offer a good amount of free storage to a lot of people.

Upon registering for Google Drive, users receive an initial 5GB free, plus an additional 10GB in Gmail storage, and 1GB of free space for Picasa. Users can upgrade its memory to 25GB for $2.49 a month or 100GB for $4.99 a month. Users can also upgrade up to 16TB which costs $799.99 a month. This seems like an outstanding value for quite a bit of storage space.

The competition between the four major cloud storage providers has just started, it being a fairly new concept, but will become increasingly intense. As cloud computing technology advances, each organization will begin to develop newer and customized features that will heat up the competition even more. As for the best provider, it’s up to you to decide.