Most don’t associate corn fields and GPS positioning, but to make intricate corn mazes every fall, designers look to tech to get the job done.

Who says farmers are fuddy duddies when it comes to technology? Corn farmers across America (and some places internationally) have been gearing up for autumn and the subsequent slew of visitors, excited to wind their way through a maze of maize. When going through corn mazes as a kid, I was always perplexed as to how the designs seemed to be so accurately carved through the produce. In fact, I was still perplexed, until this morning when Wired explained some of the high-tech ways maze designers can put details as intricate as the fifty United States into a field of corn. 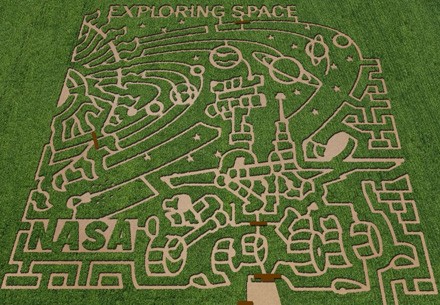 Tools of the trade for corn maze designers include GPS and CorelDRAW software. There is also the fine line between challenging someone in a maze and driving them crazy. Sixteen years ago, Brett Herbst started designing corn mazes and now his company, The MAiZE, is the largest corn maze design company in the world. Over the years, the organization has made over 2,000 different mazes all over the country, in addition to Canada, the U.K., and Poland. The two most popular designs this year are Obama and Romney portraits, and a Girl Scouts logo (in commemoration of its 100th birthday).

Herbst has designed mazes for fields as big as sixty acres, but the designer himself thinks the best size is a maze in an eight to ten acre field. Again, Herbst knows the line between causing people to get lost for hours, and making sure the maze is still a challenging, enjoyable puzzle.

After the maze is designed, a system of flags is laid on the field to indicate cuts in the corn. Spray-painted dots on the ground also work as directions for where to cut. It’s essentially a giant connect-the-dots puzzle. The tools of the trade for The Maize employees include rototillers and riding lawn mowers.

To mess with maze rats, Herbst will add bridges, which more often than not lead the subject back to the entrance, instead of the exit, hiding the correct path in the shadow of the bridge. Also, Herbst will often make designs out of the corn, by cutting it into shapes, but for a visual change from above, he will also occasionally cut the corn so the design or lettering in his mazes is made out of the “white space” he removes.

So GPS, CorelDraw, what other tech is used in corn mazes? Herbst likes to add QR codes throughout the maze to give travelers in the maze interactive clues to finding their way out. People can also get clues via text message. One example of a clue is as follows: “At a fork in the road, a person will be told to turn 320 degrees to the left, then 450 degrees to the right, and another 30 to the left. Left or right?”

To read more about how GPS is used in other ways, check out our blog post about cell phone privacy and how major carriers are working with the government to protect (or eradicate) cell phone users’ privacy.