Note: There’s nothing NetHosting cares about more than the security of your data. Learn more about how secure our web hosting services are in our state-of-the-art data center, protected by biometric scanners, 24 hour IP cameras, and more.

The Cyber Intelligence Sharing and Protection Act (CISPA) passed in the House of Representatives yesterday, the final vote count being 248 to 168.

CISPA was created in an effort to improve Internet security, but some are concerned that it will violate citizens' privacy to try and achieve its goal. The current White House administration sides with the worried and announced on Wednesday that it would veto the bill unless it was changed to protect consumer privacy. Since then the bill authors have made a few changes to the language of the piece of legislation but no further comment was made from the Senate or the White House about whether or not the updated bill would get signed into law or not. 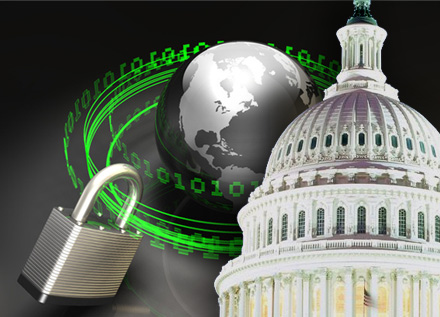 In the bill, Internet service providers (ISPs) are given the power to share information with the government (including the Internal Revenue Service, the Department of Homeland Security and the National Security Agency) if the information is deemed a cybersecurity threat. Along the same line, an ISP doesn’t have to withhold any personally identifying data in the information it shares with the government. Many consider this a step backwards from the progress that was made with previous privacy laws (namely FISC), which prohibited ISPs from releasing customer information unless given a court order.

Not only will ISPs be able to report cybersecurity threats and the personal information attached to the accounts the threats are coming from, but ISPs will also be shielded from any privacy lawsuits from customers who are identified as threatening cybersecurity, due to a perceived security threat. Finally, ISPs are given anti-trust protection in CISPA, meaning that they cannot be prosecuted about claims that the ISP itself was engaged in cybersecurity threats.

It’s important to note that despite the title of the bill, the specific language is much broader than simply “cybersecurity.” The phrase used multiple times throughout the bill actually says “national security” which could expand to include a much wider range of threats found in customers’ Internet usage.

ISPs are also given the right to share customer data with other ISPs so they can quickly eliminate any cybersecurity threats. Minutes before the vote, final amendments were made to protect data over five years old, and making library, firearms, tax, and medical records unavailable for examination.

Opponents of the bill include the ACLU, the Center for Democracy and Technology, and the Electronic Frontier Foundation (EFF). The ACLU was very vocal in insisting that Americans' private data should not be given to the military and that if data is in fact sent to the government, it should be made anonymous to protect citizens.

Reports claim that this bill is the “Son of SOPA” but unlike SOPA, the bill has the support of many of the big tech companies that opposed SOPA, like Facebook, Microsoft, AT&T, Verizon, Oracle, and others. Dan Kaminisky and Stewart Baker were general counselors to the National Security Agency and objected to SOPA but are in support of CISPA. Analysts seemed to agree that their influence helped stop Congress in passing SOPA, and that their support of CISPA is a big blow to the opposition's cause. Both wrote an editorial on Wednesday that pointed out that networks need security in order to truly offer privacy.

Note: Some people think that virtual hosting isn’t truly private because you share your server space with another customer. CloudLinux eliminates any concern of your virtual hosting neighbor intruding on your space, so you can host with peace of mind.

Since the House has passed the bill, it now goes to the Senate for a vote. If it passes there, it will go to the White House to either be vetoed as the President threatened earlier this week, or to be signed in as law.

If you want to read about the now-dead SOPA bill and why it was so violently opposed by the majority of the Internet (users and companies alike), take a look at our blog post explaining the details of the bill.