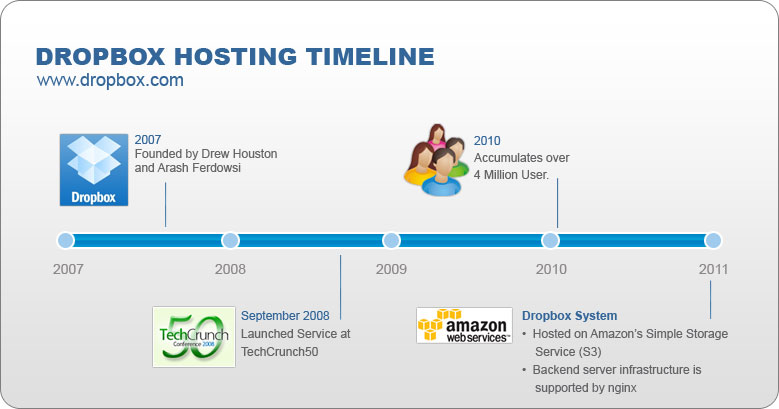 Dropbox is a free and paid service that lets you synchronize the storage and sharing of your photo, doc, and video files.

OverviewDropbox allows users to store and share data via the cloud using file synchronization. Owned and operated by Dropbox, Inc., the file hosting service was founded in 2007 by Drew Houston and Arash Ferdowsi after receiving initial funding from Y Combinator and is currently based in San Francisco.

The idea behind Dropbox originated from the mind of a frustrated MIT student, Drew Houston, who was looking for a way to have anywhere-access to his files without being totally dependent on a USB drive. In his words, “Each product [I tried] inevitably suffered problems with Internet latency, large files, bugs, or just made me think too much. Nothing just worked, so I started hacking something together for myself and then realized it could solve these problems for a lot of other people.”

Drew founded Dropbox, Inc. in 2007 and officially launched the service a year later at TechCrunch50, where it was extremely well received. Since its launch, it has received a number of awards, including the 2009 Crunchie Award for Best Internet Application, Macworld’s Editor’s Choice Award that same year, and nominations for 2010’s Webby Award and the Mac Design Award by Ars Technica.

Adam Gross left Salesforce to join the Dropbox team in 2009 as Senior Vice President of Marketing and Sales and subsequently implemented a strategy that accumulated over 4 million users by early 2010.

Dropbox is lauded for its universality of application, with its uses ranging from basic backup, file sharing, and convenient data access to coordinating and managing the movements of tractors on a farm. Users are encouraged to be as innovative and vocal as possible and to share their successes and feature requests with the rest of the Dropbox community via forums and other support channels.

Updates to the service are ongoing, but the root function of Dropbox remains the same: the ability to sync and share files (of any size or type) online and across networked computers automatically. The user simply downloads the service on any number of computers and syncs his or her account to those computers (Windows, Mac, and Linux), after which their files are automatically updated across the network when anything is added or changed, wherever there is an internet connection.

Dropbox accounts are also accessible via the web on any un-synced computer or mobile device for file viewing only, while synced mobile access is available through a free application for iPhone, iPad, Blackberry, and Android.

For backup purposes, Dropbox keeps version history for up to 30 days with the option to pay for unlimited version history. Users can pull up the previous versions of any given file as well as undelete them, allowing for worry-free, Internet-accessible backups for the users’ most important data. Versioning is made efficient with the use of delta encoding, limiting updates to the portions of the file that were changed rather than uploading the full document or file for every sync.

Security features include military grade encryption methods (SSL and AES-256) of all transmitted and stored data. Users’ data is also only viewable by invited parties.

Dropbox users have access to 2GB of free storage, while paying customers can have as much as 100 GB of space, so how does the Dropbox team handle the weight of several million accounts with varying degrees of storage space?

When Dropbox first began, it operated out of an apartment and had a team of four people, two of which were founders Drew Houston and Arash Ferdowsi. Reportedly, it was a struggle to maintain the scaling capacity for a burgeoning number of users, but, luckily, they were able to accommodate that growth and currently user files are stored on Amazon’s Simple Storage Service (S3) in addition to the user’s own computer. Amazon operates multiple data centers across the U.S., and Dropbox’s resources are spread out among them.

Founded in 2007, Dropbox is a highly versatile backup, file sharing and syncing service that is both affordable and easy-to-use. Its scalability and storage capacity is made possible through the flexibility of the Cloud.

Kincaid, Jason. “Dropbox Acquires The Domain Everyone Thought It Had: Dropbox.com.” TechCrunch.
http://techcrunch.com/2009/10/13/dropbox-acquires-the-domain-everyone-thought-it-had-dropbox-com/ (accessed May 2, 2011).