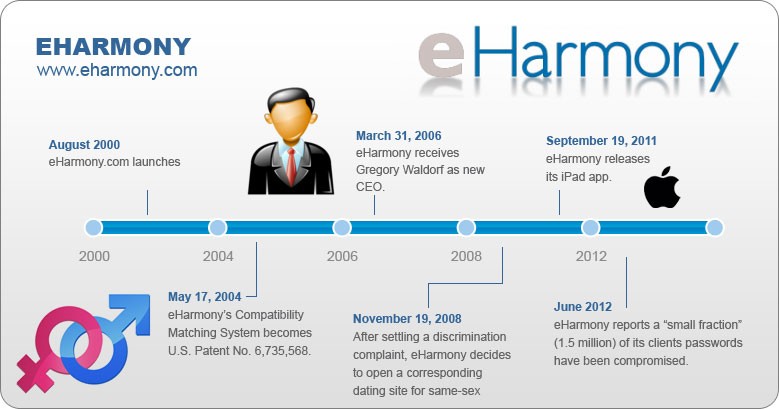 eHarmony is the online matchmaker for millions of singles around the world and is cited as being responsible for about 5% of all marriages.

eHarmony is a dating site dedicated to setting people up with potential companions who share compatible traits and characteristics with one another. It proudly creates millions of long lasting relationships every year with couples ranging from every background, age, race, and religion with its patented Compatibility Match System. eHarmony also reports an average of 542 eHarmony members are married in the USA daily.

eHarmony is the solution Dr. Neil Clark Warren developed in order to streamline the dating scene and create long lasting relationships while curing the increasing divorce and failed relationship rates. Dr. Warren researched and gathered information for about 35 years diligently to ultimately come up with several empirically proven principles in regard to romantic compatibility.

With all of this data under his belt, Dr. Warren founded and launched eHarmony.com in August 2000, backed by US$3 million in venture round financing. Before it became an online matchmaker, it played the role of dr. love which posted regular advice and general counseling articles to couples who were already in a relationship. It wasn’t very long until it started to emerge as an Internet dating service. Within its first 3 years, eHarmony claimed to have gained 3 million members which grew over time until now it has reached over 20 million registered users.

eHarmony, in one of its popular television and radio campaigns, claimed to be responsible for almost 5% of the marriages in the US. It also attempts to increase this number by increasing its advertising campaign and improving its algorithms by continually following up on its success stories. The online setup machine recently ran into a series of legal complexities due to an absence of dating services offered for same-sex couples. eHarmony responded to the accusations of discrimination by stating, “Nothing precludes us from providing same-sex matching in the future. It’s just not a service we offer now, based upon the research we have conducted.” It eventually settled on those lawsuits by offering an affiliate website called Compatiblepartners.net.

eHarmony recently made the headlines again in early June 2012 as it confirmed that over a million of its users’ passwords had been compromised by the same Russian hackers who stole more than 6.5 million passwords from the online networking service LinkedIn. In its blog, eHarmony advised its users to change their passwords.

As mentioned above, it wasn’t until a little later in eHarmony’s history that it began to explore what the web had to offer in determining couples compatibility. For most of its life, its website was mostly using the web as a platform for users to take an online survey and look for matches on their own. Since then, eHarmony took a page or two out of the intricate systems of internet giants such as Google and Netflix.

Using their tech chief, former Yahoo search engineer Joseph Essas, it developed some complex algorithms to cut down on the soul mate perusal even more. One thing which eHarmony had to innovate, which Netflix and other services based on user taste assignments haven’t had to address, is the consideration whether or not the song wants to develop a relationship with the listener.

The algorithms also help increase the levels of compatibility, based on how many levels people are compatible for one another from superficial traits like favorite foods or movies to intimate characteristics such as conflict resolution and priorities. These algorithms have become very perceptive. For example, it recognizes that its Manhattan clients are less likely to date someone who lives outside a close proximity. Compatible couples are assigned based on factors which eHarmony calls its “29 Dimensions of Compatibility” which is plugged into its patented Compatibility Matching System ®, a graph partitioning generator. People are distinguished and paired up according to individual emotional temperament, social style, cognitive mode, relationship skills, values and beliefs, and key experiences.

Users pay an annual fee of US$240 and have access to view the profiles of all the people that eHarmony suggests they are compatible with.

eHarmony is notorious for never holding a lasting relationship with its tech structure. Gong through different storage and warehousing methods faster than its users go through compatible profile pages, it’s slightly difficult to actually pin point what eHarmony is implementing at any given moment.

eHarmony powers its algorithms with Oracle products and used to use AWS to power its big gun, a 50 node Hadoop cluster. eHarmony has to bear quite a heavy data processing load since it has to update its entire database whenever someone new joins. eHarmony has since abandoned Amazon Web Services and replaced its old Hadoop cannon with another large cluster of Atom servers from SeaMicro to power its data analysis, all stationed in an undisclosed  colocation center. This was done to help cut down on eHarmony’s considerably high operation costs.

eHarmony is a widely acclaimed online dating service that uses computer-powered algorithms to determine compatibility based on various characteristics, and recommends people with compatible traits. With tens of thousands of new people joining eHarmony regularly and millions of others marrying each year, eHarmony is one of the primary online matchmakers.