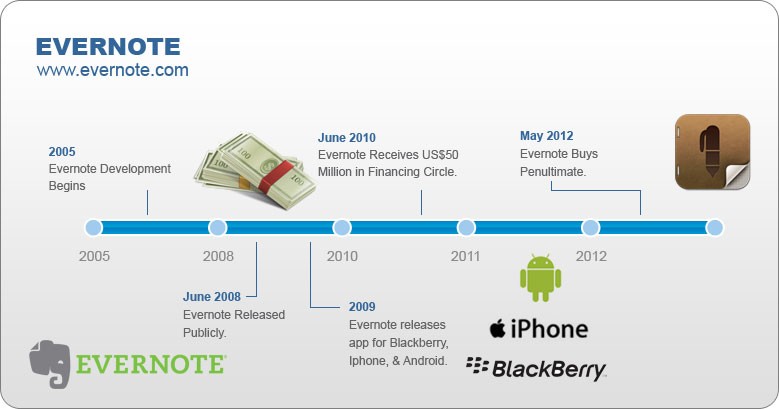 Evernote is designed to be a second brain where users can write and digitally save important information, memories, and contacts they don’t want to forget.

Evernote Corporation is a developer of applications which are supposed to “help the world remember everything, communicate effectively, and get things done.” Evernote Corp. creates apps for computers and mobile devices, which can be used to take notes and record important information. This data is stored onto Evernote Corp.’s private cloud server architecture.

Evernote Corporation, originally called Evernote LLC, was founded by Stepan Pachikov, a Kazakhstani computer engineer. Pachikov was a pioneer in the former Soviet Union’s tech industry and towards the end of the USSR, he was part of the first Soviet-American joint venture which developed basic handwriting recognition software, ParaGraph, in 1988. Pachikov was fascinated by day-to-day mobile computer interfaces and continued developing and selling similar technologies.

One problem Stepan Pachikov wanted to find a solution to was losing his memory. He noted that with age, his memory wasn’t becoming any sharper yet the details he needed to remember were growing. He describes in an interview, “I need a device or a tool, something which would allow [someone] to capture something very easily.” Inspired by the Apple Newton endless typing software, Pachikov and other developers went to work creating this database for memories and ideas in 2005.

The resulting product, entitled Evernote, was launched February 2008 in a closed beta with the goal of gathering a 10,000 member test crowd. The numbers quickly surpassed 10,000 and eventually reached 125,000 within four months at the end of the closed beta trial. In June 2008, Evernote was launched publicly and is steadily increasing in size with over 30 million members presently.

As the company grew, so did the resource requirements. Pachikov decided to turn the wheel over to a trusted friend and developer Phil Libin who had a better understanding of cloud computing and cloud architectures, which would be used to increase the resources needed. Because Phil still understood the vision of Evernote Corp., he could combine that with his cloud knowledge and take the company to the next level. While Libin became the CEO, Pachikov stayed on as a board member but asserts that he doesn’t run the company.

Evernote Corp. has been successful in their recent financing ventures but it hasn’t always been that way. At the very beginning, Evernote Corp. was on the brink of collapsing and would have collapsed, had it not been for a generous, out of the blue, US$500,000 donation by a satisfied Swedish customer. Since then, Evernote Corp. has received US$20 million in 2010 from Sequoia Capital, Morgenthaler Ventures, DoCoMo Capital, and Roelof Botha. In 2011 it received an additional US$50 million from many of the same names and this year it received US$70 million. The company is already valued at US$1 billion and is rumored to be filing an IPO towards the end of this year. In responding to the question if Evernote Corp. was planning to be acquired, Libin reported that they don’t want to sell for several billion; they want to be a 100 year old company.

Evernote’s growth really went up a notch when it released its apps for mobile devices in 2009. Blackberry started it off releasing an app in May and iPhone quickly followed suit releasing its app in July. Android was next in line in December and the Windows 7 phone app was a little behind, coming out in June 2011. And in May 2012, Evernote Corp. bought the iPad handwriting app Penultimate, which is predicted will allow handwriting recognition for future products and features.

Like other online communities, Evernote is a multi-tiered community with two classes; free and premium subscriptions. Free users are allotted 40MB a month for note uploads. Users can switch to Premium and for US$5 a month will get 500MB a month, enhanced security, first-in-line access to recognition queues (image recognition software), and the best customer support.

Evernote Corporation has also released other apps which are supposed to enhance users’ memory and streamline the second brain even more. Some of those include Evernote Skitch, which lets users communicate thoughts through simple drawings such as arrows, circles, or free handed sketches. Evernote Hello replaces address books and instead of storing contact alphabetically, users are organized based off face, date of encounter, and context of the encounter. And Evernote Food is for remembering “memorable food experiences” by storing pictures, maps, and notes.

Evernote Corp., following their company mantra of transparency, is very open with their server architecture. All of its servers and networks are housed in a secure location in Santa Clara, California.

Evernote’s systems are privately owned, built, located, and operated. All the traffic going to and from Evernote passes through its own HTTPS port and it receives over 150 million HTTPS requests per day coming from all over the globe, typically peaking around 250 Mbps. Additionally, they manage 300+ servers in their private data center, which is no easy task.

To handle all of this traffic, Evernote routes visitors through its independent network of A10 load balancers plus an AX 2500 and a failover box. And at the heart of its systems, Evernote uses what it calls “shards.” Each individual shard is equipped with two quad-core Intel processors, crammed full of RAM, and Seagate enterprise drivers within mirrored RAID configurations. On top of these shards are Debian hosts which manage dual Xen virtual machines. Each of these shards house 100,000 users and with over 30 million users, that’s about 300 shards or servers.

Most of their users’ information is stored onto these shards but Evernote Corp. attaches authentication servers, which it calls its UserStore. The UserStore is a database that stores usernames, passwords, and shard IDs. The information stored on these shards and databases is backed up nightly and has multiple mirrors and redundancies.

To facilitate searching and finding tags on photos, Evernote Corp. employs its own AIR processors (Advanced Imaging and Recognition). Developed by Evernote, it is designed to clean up images and recognize shapes which could be words and attempt to compile possible matches.

Designed to be its users’ second brain, Evernote is quickly gathering popularity among a wide scope of clients. Business executives, homemakers, artists, and writers alike all use it to store their ideas and memories and have quick, easy access to it. With its high valuation and an office in Japan, Evernote seems to be well on its way to stick around for 100 years. Who knows what other features Evernote Corporation will come out with in that time?