Note: Evernote is another good example of how a cloud server infrastructure can benefit a company and its clients. See what cloud hosting can do for you!

China has been an unconquerable giant for most online startups. Evernote is going to try its hand at it with an innovative marketing strategy.

With over 1 billion people and 500 million of them actively using the Internet, China seems to be the golden egg, the land of milk and honey, or the Holy Grail for the tech industry, especially online corporations. But the market seems to be just out of reach and crossing the Pacific for online organizations is no cake walk. China has proven to be as impenetrable for online startups as it was for the Huns. But there is one company that is determined to crack the golden egg instead of waiting for the Great Wall to open up its gates. Who else would it be but Evernote Corporation? 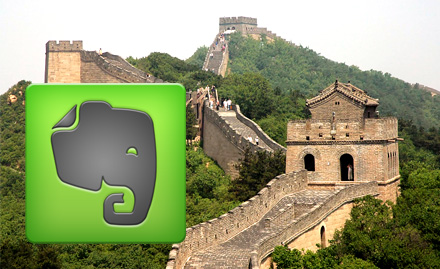 The cloud-based innovator who stores your notes and memories is setting sail to the Orient to try to tap into the sleeping web market. Unlike previous attempts from other companies, Evernote Corp. may very well make it. Instead of taking the approach of imposing an app or service on the People’s Republic, Evernote Corp. is going to try to start the business from the ground up. Its primary objective in doing this is building a data center within mainland China which is easier said than done.

In order to help make that transition, Evernote Corp. has developed a Chinese exclusive app called Yinxiang Biji, or “Memory notes”/”Impression Notes.” Evernote CEO Phil Libin commented on his blog, “The most common request we get from our Chinese users is to make Evernote faster, more reliable and better integrated with the rest of the Chinese Internet.”  Yinxiang Biji is supposed to help fix those problems but the best fix, conveniently, is to build a separate data center on the Asian continent. Evernote Corp. will also separate the two entities, making Evernote an American-based service and Yinxiang Biji exclusively Chinese. That means Chinese employees are managing the servers and developing apps and features.

Note: Evernote is renowned for developing ingenious apps for its users. Do you have an idea for the next breakthrough app? We're happy to host it!

This venture will be funded from the most recent funding round which ended with Evernote Corp. getting US$70 million. Evernote Corp. also hopes to make this project profitable and it is currently developing a Yuan support system. China already has 1.1 million users but only a fraction of them are paying for the service. Phil hopes that by implementing a data center in China which would increase the quality of the service, more Chinese users would be inclined to pay for the premium service. But Evernote Corp. is not stepping into unclaimed territory. As Evernote Corp. has its fair share of competition in the west (i.e. Dropbox and Google Drive) it will have its competitors in the Far East as well, such as Baidu’s Wangpan. So although the Chinese market is somewhat closed to Western online services, Evernote Corp. won’t be raking in the numbers without a fight.

This move has almost all parties worried however. The Chinese government really doesn’t like having foreign-run businesses, which it can’t control, operating within its borders. Evernote is worried about all the red tape and loop holes it will have to go through. And users in the Western Hemisphere aren’t too excited about sharing servers with a government that is renowned for its prying into others information.

Having a separate data center in China should solve all of those concerns. Phil Liblin conceded at The Next Web conference that they have already considered those concerns and states that if the Chinese government desires to have access to the data of its citizens, Evernote Corp. will have little to no control over that and will most likely cooperate. Along those lines, Evernote has assured the PRC that it will cooperate and provide its classic transparency. As for us, since the Chinese and Western Evernote applications will be housed on completely different servers, we won’t have to worry about our precious notes, recipes, and memories being extracted from the cloud.