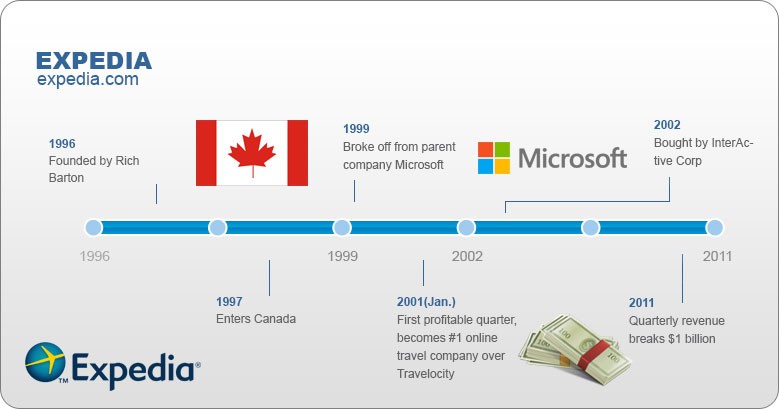 Bandwidth (Why medium?): Expedia’s database includes information regarding flights, airlines, hotels, rental cars, and more. With over 40 million visitors a month, this site has a fair amount of traffic. Because the type of data stored is small (information as opposed to videos), the bandwidth is medium.

Disk (Why low?): Storage for Expedia includes information from all over the world, but most of the data is constantly changing. Although Expedia needs to store materials on hotels and airlines, the availability, times, rates, and other pertinent numbers shift daily.

CPU (Why low?): Although commands must shift through plenty of information, the commands themselves are relatively simple: find and retrieve relevant data. Expedia has very few functions, as it mostly acts as a database for ever changing reports.

RAM (Why high?): When a customer puts in a command regarding days and locations, Expedia needs to sort through tons of data and present only the relevant results.

Scalability (Why high?): The number of visits Expedia takes in changes with the seasons. A high scalability is needed to accommodate large spikes during the times when people like to travel the most. Having 19 of their own dedicated servers allows Expedia to handle the rising number of visitors with ease.

Expedia.com is a travel booking website that acts as an online travel agent, helping customers find and book various travel accommodations. Users enter locations and times into a search field and are given flight and hotel options combined in the results. Booking multiple travel accommodations at the same time gives customers a sizable discount. Before you travel to a destination, Expedia can find attractions such as theme parks, spas, golf courses, and historical sightseeing near your vacation location. Partnerships with credit card companies give customers the opportunity to collect reward points that go towards bigger discounts.

Founded by Rich Barton, Expedia.com started out as a division of Microsoft in 1996. It separated from its parent company in 1999, stayed independent for a while, then was bought by InterActiveCorp (also parent company to CollegeHumor, Match.com, and UrbanSpoon) in 2002. Part of its rise in success has been acquiring other travel booking companies, such as Hotels.com, TripAdvisor, and Hotwire.

Expedia expanded to Canada in 1997, the first country outside of the United States. Since then, Expedia has spread to Australia, Europe, Southeast Asia, and Mexico. January 2001 marked its first profitable quarter, and the surpassing of Travelocity as the #1 online travel company. In 2002, Expedia Corporate Travel is launched.

In 2010, a disagreement between American Airlines and Expedia caused the travel site to remove the airline from its main website. A year later, American Airlines was returned to one of Expedia’s aggregate travel booking websites. The company generated $1 billion in revenue in 2011. In 2012, Expedia received more negative attention after some fans were unhappy with a controversial Expedia commercial that featured a lesbian couple getting married.

Today, Expedia is considered the largest travel booking website. The company has over 12,000 employees worldwide and offices in 29 different countries. Not only has it been consistently voted the best travel agency in the world, it is also the largest.

The site offers information and booking on flights, rental cars, hotels, and cruises. Expedia’s main feature is the discounts you receive when you book a flight and hotel at the same time. Similarly, there are deals on local attractions and activities, as well as sales at stores. A partnership with Groupon gives customers the option of booking with friends or family for cheaper.

Expedia has 19 servers located near its Washington offices and in their own Arizona data center going through 594.126 GB each day. By having its own dedicated servers, Expedia can retain control over its data. The spikes in seasonal travelers visiting the website make it necessary for the servers to have lots of redundant space. The site has a slower response time later in the evening when the number of visitors increases, meaning that redundancy may be limited. Expedia is hosted by Neustar, a company that also hosts for other ecommerce websites.

Despite some setbacks and disputes in its nearly 18 years of life, Expedia has become a leader in online travel booking. Although Expedia has some strong competition, it is a household name that remains strong in its forte. 19 dedicated servers will allow the company to maintain its status throughout holidays and popular travel times, but more will need to be added soon to ensure faster response times.