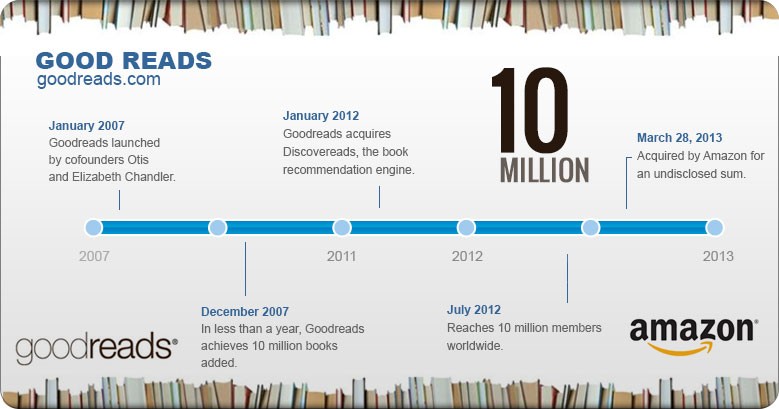 Bandwidth (Why Low?): Goodreads doesn’t display large amounts of data on their site. In fact, most images aren’t anything more than a book cover, and they don’t stream videos (except occasionally on their blog).

CPU (Why Medium?): They definitely need some computing power to run all the features they provide as well as all the searches that are performed. However, these searches aren’t incredibly complex, so they only require a medium amount.

Disk (Why Medium?): They have to store a lot of information for each of their profiles, as well as descriptions and ratings for millions of books. However, they don’t have products, and they don’t have as many users as some of the giants, like Amazon or Facebook.

RAM (Why Medium?): They don’t need to worry about providing a seamless shopping experience, like giant E-retailers might. However, they do provide lists of genre-specific books and make lots of recommendations along the way.

Scalability (Why High?): Before their merger, this would have been low as Goodreads was notorious for their server issues. Since being bought out by Amazon, they now have access to their gargantuan data centers and servers.

Goodreads is a website created for readers and book recommendations. By creating an extremely user-friendly and feature-rich site, Goodreads has become the world’s largest website of its kind. Now accommodating over 16 million members, Goodreads was acquired by Amazon in March of 2013.

It grew very quickly, achieving 650 thousand members before the end of 2007, with over 10 million books added to their site. In 2011, Goodreads acquired a company called Discovereads, which is a book recommendation engine. This engine, now a core feature at Goodreads, allows users to find recommendations based on books read, books categorized as “to read,” or even by specific genres.

Currently, Goodreads boasts over 16 million members, 23 million reviews, and 525 million books added to users’ profiles. Their newsletter distributes to over 12 million users. This enormous success, coupled with the compatibility of the Kindle as well as massive book sales, led Amazon to acquire Goodreads on March 28, 2013. Goodreads will remain an independent entity and will retain the same staff.

Goodreads is a social sharing site that allows all users to create their own profile. The site first prompts you to begin rating books on a 5-star scale. As soon as you rate your first 20 books, their book recommendation engine can begin finding books suited to you. Along with rating books, users are encouraged to add books to their “to-read” shelves and to mark the book they are currently reading. You can organize your “to-read” books in the order you want to read them.

The social aspect of the site allows for users to become friends with each other. They can compare their book lists and compare the ratings they’ve each given books. On the homepage, users can see what books their friends are reading as well as other activity.

Once per month, Goodreads will notify their users of what’s new in the literary world. Based on books you’ve rated and have selected for your “to read” list, Goodreads will inform you of books that are to be released soon as well as live chats they’ve scheduled with authors you like.

Their merger with Amazon has fueled rumors of many more features that may be seen in the near future. The possibility of syncing Goodread’s “now reading” feature could allow readers to avoid the hassle of manually inputting their current book and the date they finish. Furthermore, selecting a book that you’d like to read could be as easy as downloading to your Kindle straight from the Goodreads site.

To sum up their features, Goodreads’ main objective is to help you find books that you want to read, and then remember those books in one organized place. Between their recommendation engine (allowing searches based on books read, books you’ve listed as “to read,” and by genre) and friends’ ratings, Goodreads provides more than enough simple-to-use tools for finding books.

At the time of writing this, not much information can be found about the system that Goodreads uses. Before their merger with Amazon, they hosted with Hosting.com, and they used Nginx servers. However, Goodreads was notorious for their myriad of server issues, with their site frequently going down because of their inability to handle spikes in traffic.

However, because of their recent merger with Amazon, Goodreads should see an immediate improvement in their ability to handle traffic. They now have access to Amazon’s almost limitless resources and massive server capabilities. To read more about Amazon’s system, visit our Amazon Case Study.

Goodreads has grown in popularity incredibly fast because of their combination of superior features meshed with easy usability. Their union with Amazon should only increase their features as Amazon looks to sync Goodread’s capabilities with the Kindle. With over 4 books being added to users’ shelves per second, Goodreads isn’t going anywhere anytime soon.