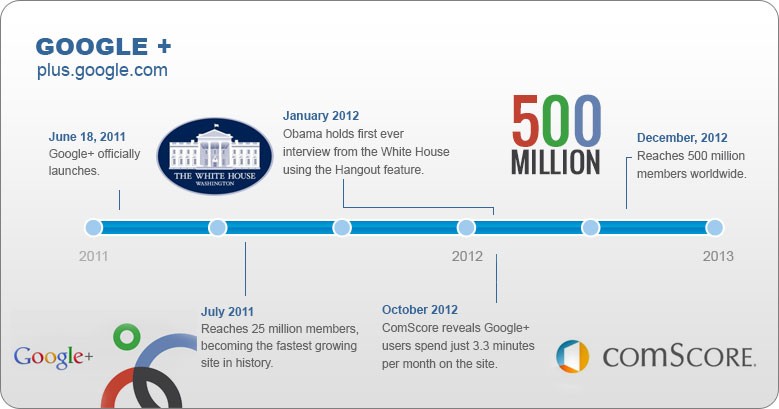 After several unsuccessful attempts at creating a popular social media platform, Google may have found a winner in Google+. Google+ has quickly become one of the most recognized and used social media sites available. They currently cater to over 500 million registered users, with about half of those actively participating. While they are quickly increasing their user-base, they still have a long road to catch up to Facebook in popularity and time spent on their site by members.

Since Google’s inception in 1998, they have been successful in their pursuit of providing virtually every service possible to Internet users. However, with the success of Myspace and Facebook, Google has tried and failed to enter the social media arena numerous times. With the advent of Google+, their luck appears to be changing.

Google first attempted to create a social media platform with Orkut in 2004, but it never really took hold in the United States. In 2008, Orkut became fully managed and operated out of Brazil where almost 60% of their members live. Two other social media attempts, Google Friend Connect and Google Buzz, also failed to garner enough interest.

Google+ was officially launched on June 28, 2011, but was preceded by the current Google staple, the “+1” feature, in March of that year. Originally known as Google Circles, Google+ was initially available by invitation only. However, massive demand forced Google’s hand to change the site to open enrollment with age restrictions based on laws according to each country’s members.

Within 1 month, Google+ users were increasing by 1 million per day with total membership reaching 25 million, making them the fastest growing website in history. By comparison, Facebook took 3 years to reach the 25 million member mark, and Twitter took 30 months. However, their colossal growth can be mainly attributed to the massive amount of people that already have accounts with other Google features, such as Gmail.

Despite their rapid growth, Google+ is still light years behind Facebook. Their membership is growing incredibly fast, but members in January 2012 spent just 3.3 minutes on the site for the month. Facebook’s members spent around 7.5 hours, or about 136 times longer than Google+ users .

When you first log into your Google+ account, you see three columns on your profile. The middle column is called your “stream.” This basically keeps you up-to-date on what the people and pages in your circles are doing.

Every time you wish to follow someone, you select a circle to put them in. For example, you can keep your family, close friends, and co-workers in separate circles. Then, you can decide which circle’s feed you want to show on your homepage, and even decide which circles to share your own posts with.

Another feature that helps make Google+ unique is the ability to host “hangouts.” Up to 10 people at a time can be in a hangout together on a video call, or even watch YouTube videos together. In January 2012, Barack Obama held the first ever virtual interview from the White House using the hangout feature.

One staple of Google+ is their “+1” button. Similar to a Like button on Facebook, the +1 button is being integrated into more and more sites, allowing for users of Google+ to see what people in their circles have “plus one-ed.”

A feature that has yet to be released is the Google+ history. According to Google, this will allow users to store “moments” and decide if the user would like to share them. For example, when someone takes a picture, they can have it automatically upload to their Google+ history, but not automatically share it. Later, the user can decide if they would like to share it with their circles. This feature will bring in information from many 3rd party sites with which the user shares posts, pictures, videos, and other types of media.

The majority (if not all) of Google’s architecture is built from in-house software. The three most used programming languages at the Googleplex (their main offices) are Java, C++, and Python. Google made their own Linux-based web server called Google Web Server. However, due to trade secrets, specifics on the server software configuration are sparse. The only detail that has been confirmed is that the web server does not run on Apache.

The storage system Google uses is its own, original file system called GoogleFS. For their distributed lock manager, Google researched and developed their own service for distributed file systems. It’s called Chubby and, since its inception, it has evolved and now replaces DNS as a name server within Google. In 2010, Google added Caffeine to their homegrown server index and search system, TeraGoogle. Caffeine is a continuous indexing system which is their bread and butter that can return hundreds of thousands of search results within a matter of milliseconds.

To handle its high volume of traffic, Google developed its own design for servers (like their software) with minimal features, equipped to run at the highest capacity possible. Because they believe this server design to be part of their success in keeping costs down but efficiency high, the company has always been very tight-lipped about their hardware.

At one press conference in 2009, Google unveiled one of their servers and briefly explained some of their hardware configuration. At the time, every server had its own 12-volt battery in case of a power supply problem in the data center. Also, each server had two x86 processors (from either AMD or Intel), two hard drives, a Gigabyte motherboard, and eight memory slots. Google also released that all of their network devices had 12-volt batteries equipped. No information about their hardware setup has been released since then, so it is likely that their design has changed.

Google has posted information on its own website about where a few of the data centers it currently owns and operates are located. They have traditionally been tight-lipped about their data centers. There are at least 12 significant data centers in the United States with more under construction. There are five more in Europe, and a few others located in various parts of the world. However, to handle the high volume of traffic Google receives, it would seem that Google would need more computing resources than 17 data centers, no matter how state-of-the-art they are. In fact, Data Center Knowledge estimates at least 36 centers worldwide. Starting in 2005, Google has used shipping containers to create many of its data centers, so they’re modularized for easy removal and addition.

Google+ represents the latest attempt by Google to create a rival to Facebook. On the surface, Google+ appears to be approaching the social media king-of-the-hill. However, a deeper look tells a different story. Their users don’t spend much time on the site, and most of their features are redundant of what Facebook created years ago. However, Google appears to be pushing their new social media toy with all their power, which is considerable. Google’s track record of innovation and success in the internet technology field is the main reason why Google+ has a chance to sustain their considerable growth in the future.

Tsukayama, Hayley. “Google plus could be the fastest-growing site in history.”  The Washington Post. http://www.washingtonpost.com/blogs/faster-forward/post/google-plus-could-be-the-fastest-growing-site-in-history/2011/08/03/gIQA9x2vrI_blog.html. (December 19, 2012).