Note: Cloud hosting is the name of the game in hosting for the foreseeable future. Get quality cloud hosting today from NetHosting to see how much easier managing your website and your data is in the cloud.

Google may rule the web, but Microsoft is proving to be a major contender when it comes to the cloud.

Once Microsoft entered the room with its cloud products under its arms, nobody was more worried about what was to become of this party than Google. As far as Google was concerned, the cloud was its turf and everything was working out alright so far. But Google knew that once Microsoft walked in, it had someone else to compete with for the limelight. 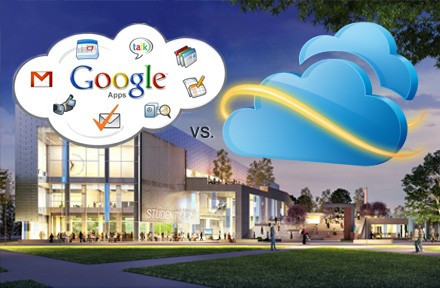 This “cloud party” never physically took place, but the same idea was manifested in Los Angeles earlier this month. The Los Angeles Community College District (LACCD) is home to the largest community college district in the nation and enrolls over 250,000 students plus hundreds of faculty. So it was a fairly big deal when the LACCD announced it would be reviewing different cloud-based apps that could be implemented into its networks for students and faculty to use. With thousands of users immersed in their laptops, smartphones, tablets, and PCs it was only natural for Google and Microsoft to pounce on this opportunity.

Note: You could host your apps on a dedicated server, but your safest bet is app hosting in the cloud. When your app becomes an overnight sensation, you’ll want the flexibility of cloud hosting.

The LACCD reviewed the goods that were put on the table by the two contenders for three years. During this 3 year trial period, the LACCD officials tested Microsoft’s Live@edu package which includes Office 365 and the organization also reviewed Google’s Google Apps. The biggest considerations were ease of use, implementation, and budget. After this trial period, Microsoft took the cake and Google was left wanting in Los Angeles.

There are many reasons for Microsoft’s winning with the LACCD. One thing that the judges were looking for from the contestants was a universal theme and platform with their cloud-based apps. With the teacher and student in mind, a universal platform would help in solving IT problems across dozens of campuses, save time on training for employees, and make sharing information easier. Another important factor was how well the apps could work on multiple operating systems such as Apple products, Windows, and Android devices. Because Live@edu is designed to support mobile management and is available on ActiveSync, it can function on the mentioned operating systems and devices.

The LACCD board also took into account that most people are already familiar with Exchange & Outlook and most students have grown up with Microsoft Office tools; they could implement it into the network without too much hassle or frustration. The LACCD also mentioned that they are committed to preparing its students for future employment and helping students become familiar with tools that are already used in offices around the country would help fulfill that objective. The money on the table for the contract won’t benefit Microsoft greatly and won’t leave Google hurting, but what is at stake are more than a quarter million users who will become acquainted with Microsoft cloud-based products i.e. potential future customers.

This isn’t the first time Google had a string of hard times in Los Angeles. Not much earlier before the LACCD contract, Google attempted to win a US$7.25 million from the LAPD when they were moving towards storing information into the cloud. The LAPD eventually deemed Google as not secure enough for their needs which could have stained Google’s reputation among organizations looking for secure cloud computing tools. Although the LACCD maintains this event did not play into its consideration, it did note that Microsoft had better authentication software and stronger security measures than its counterpart.

This recent event shows that Google and Microsoft are now in a pitched game of King of the Hill in terms of who controls the cloud market. Because Microsoft jumped into the market a little later than Google, it makes sense to say that Google is still leading the market. But for how much longer? This incident shows that Microsoft has the wherewithal and capabilities to not only become a strong competitor but a possible victor since the cloud tools it has to offer are already widely implemented in a previous condition. This particular contest wasn’t Napoleon’s Waterloo for Google, but it could be a sign of Microsoft’s potential to move towards a strong cloud presence.