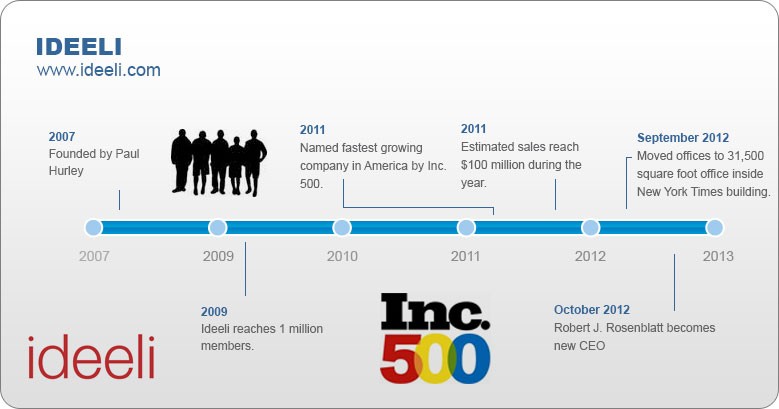 Ideeli is the largest membership-only retailer to the mass-affluent market in the United States.  Specializing in discount luxury goods, ideeli has more than 1,000 brand partners, and currently has more than 6 million members.  Their business model is based on “flash sales” with most of their sales lasting less than 40 hours.

Ideeli was founded in 2007 by Paul Hurley, a lifelong entrepreneur.  For most of his career, he dabbled in several small businesses that he founded, but none of them ever surpassed $2 million in annual sales.  His breakthrough came when he recognized two major trends in business: e-commerce business was taking market share away from brick-and-mortar businesses, and that brands were having a difficult time connecting with customers in the current marketplace.

Mr. Hurley launched ideeli with the original intent of providing a marketing platform, with their customers being brands instead of individual consumers.  However, that all changed when Mr. Hurley learned about exclusive shopping clubs in Paris and promptly integrated that business model instead.  Immediately, the company took off, even garnering the honor of fastest growing company in 2011, according to Inc. 500.

Because of their exponential growth, ideeli’s offices couldn’t support their staff.  According to visitors, ideeli crammed hundreds of employees elbow-to-elbow in their miniscule workspace.  Even after subletting a third floor, Ikea tables had been set up between rows to accommodate their growing staff.  In September 2012, ideeli decided moved to a 31,500 square foot office inside the New York Times building.  This move came on the heels of upgrading their photography studio to a 23,500 square foot space.  Their new extravagant set up equips them for continued growth.

Their last reported sales figures were near $80 million in 2010, but they have since adopted a more restrictive policy on releasing data.  However, 2011 sales estimates were just shy of $100 million.  Paul Hurley recently explained in a September 2012 lunch interview with Adrianne Pasquarelli of Crain’s New York Business that ideeli is perfectly in position to further increase their sales.  Hurley explains that the combination of increasing popularity in online spending and America’s affinity for shopping at a discount places their company in an ideal position for the future.

Effective October 24, 2012, Paul Hurley became director of the board of directors and oversees the direction and operations of the company on a very broad scale.  He is being replaced by retail industry veteran Robert J. Rosenblatt, who brings over 25 years of leadership experience in such companies as Tommy Hilfiger and Bloomingdale’s.

Ideeli’s business model is driven by high speed sales with a volume limit on their products.  In fact, many of their sales last only minutes because they sell out rapidly.  This strategy forces them to move up to a thousand new products a day through their photography studios, also making ideeli one of the largest employers of models in New York.

Ideeli caters to shoppers who are on the hunt for luxury items, but don’t have the pocketbook to acquire full-price designer items.  When customers arrive at the site, they are first asked to register as members.  By doing so, ideeli can send out deals to their members on a very consistent basis, increasing their revenue per customer and lowering their overall costs.  Ideeli alerts their customers using Facebook as well, further facilitating members with smartphones to take immediate advantage of sales while on the go.

Ideeli offers members the option to pay $7.99 a month to receive notices about sales up to an hour earlier than non-paying members.  This membership fee further caters to their target audience of retail-savvy consumers who search diligently for discount ways to dress fashionably.

Another free feature designed for ideeli’s fashion-conscious consumer is their blog.  Updated several times per week, their blog focuses on fashion tips, sales, ideeli news, and even contests with prizes.  A reader can stay up-to-date on current fashions and take advantage of the products recommended by ideeli with discounts up to 80%.

Because of their exponential growth and unique business, ideeli has been required to upgrade their data handling abilities.  Ideeli’s sales are launched every day at 11 a.m. EST, creating a huge load on their system at one very specific time each day.  In fact, their traffic at peak hours spikes to over 40 times more than non-peak hours.

To best serve their clients, ideeli utilizes memcache servers through Nginx.  For ultimate performance, ideeli utilizes techniques such as end-of-cycle database hits and cache warming.  However, when a server is lost, the website becomes measurably slower.  To combat this issue, ideeli has developed a custom spinwait load shedding method that helps to free server processes during the major peak times.

Despite their best efforts, if ideeli lost even as little as 10% of their cache, the customer experience would slow down considerably.  In order to alleviate this issue, ideeli turned to Riak by Basho Technologies.  Riak provided ideeli with a fault-tolerant database that distributes data across node clusters.  There is no one single “master” node that could cause major problems if that specific one went down.

Using Riak in tandem with their memcache servers through Nginx proved to be the solution that they were searching for.  Ideeli’s Director of technical Operations, David Mitchell proclaimed, “The technology is rock-solid.  Both Riak and Basho have exceeded our expectations.”

Ideeli implements one of the more unique business models in their membership-only style of retail e-commerce.  They have helped millions of customers afford luxury clothing and accessories at discounted prices.  Many predict that their exponential growth will continue, possibly even becoming a billion-dollar company in the very near future.