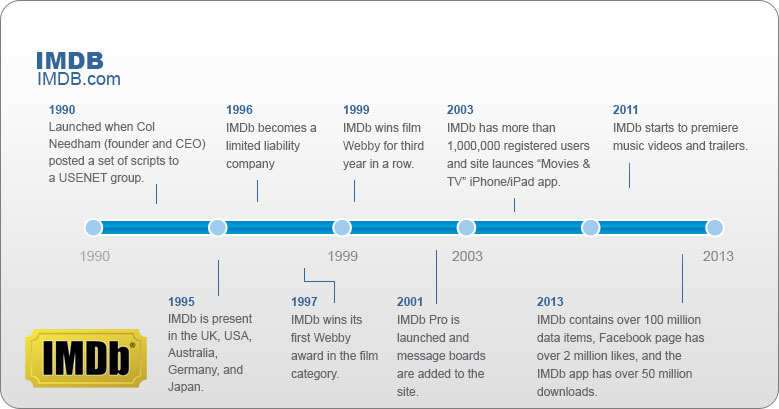 Bandwidth (Why Medium?): Although IMDb doesn’t stream a ton of full moves like Netflix does, it does stream movie trailers and some TV shows: high bandwidth is necessary to ensure that all viewers can access materials. IMDb hosts with Amazon’s CloudFront, which provides a reliable service that accounts for traffic spikes and lulls.
CPU (Why Medium?) Because IMDb hosts a catalogue of movie and television show information, it needs an intermediate amount of computing power to provide search results that mine millions of pages of information. As IMDb has over 100 million entries, they need computing power that can adequately search through a huge catalogue quickly and provide a list of relevant search results to users.
Disk (Why High?) IMDb has a lot of information to store, since they not only have pages for movies, shows, and individual episodes of shows, but actors, directors, and producers, etc. Almost all of these pages will also have hosted images, as well as movie and show trailers, which is a lot of information to be stored. IMDb’s disk space has to accommodate millions of entries and links, requiring a lot of space.
RAM (Why High?) To make IMDb quickly searchable, it needs a lot of RAM. At over 100 million entries, IMDb’s database is vast, and so its RAM needs to be high to mine entries and provide users with relevant search results.
Scalability (Why High?): IMDb hosts with Amazon’s CloudFront, so they have access to a highly scalable hosting platform without having to maintain servers and other hardware. The cloud is an excellent choice for IMDb because of its elasticity: the ability to cater to spikes in traffic and cut back when there is less need.

IMDb is a movie and television show database that provides detailed information about visual media as well as actors, directors, and producers. IMDb also gives users access to various media related to TV and movie culture, with stills, set photos, trailers, and links to interviews and content relating to a movie, show, or individual. IMDb has over 160 million unique monthly visitors.

IMDb was launched on 17 Oct 1990 when Col Needham (founder and CEO) posted a set of scripts to a USENET group. In 1995, IMDb was present and accessible in the UK, USA, Australia, Germany, and Japan, and it became a limited liability company in 1996.

In March 1997 IMDb won a Webby award in the film category for the first time, and won the award again the following year 1998. 1998 also saw IMDb’s system comment functionality added, and its welcome into the Amazon group. The following year, IMDb won the Webby award for the third consecutive year as well as a People’s Choice Award, both were in the film category. In 1999, IMDb also launched their message boards and IMDb Pro in 2001.

By September of 2003, IMDb had more than 1,000,000 registered users, and the site launched its “Movies & TV” app for iPhone and iPad in December 2009. IMDb continued to get acclaim in 2010 as it was named the #1 reference app of the year by MacWorld, and the #1 Entertainment app of the year by Mobile World Congress.

In 2011, the Wall Street Journal selected IMDb’s “Movies and TV” app as 1 of 10 apps that will change your life, and Time Magazine recognizes the app as one of the best 50 iPhone apps of 2011. During 2011, IMDb started to premiere music videos and movie trailers, including “The Twilight Saga: Breaking Dawn – Part 1” and The Black Keys’ “How for You” video.

Currently, IMDb contains over 100 million data items, and its Facebook page has over 2 million “likes.” IMDb’s iOS and Android apps have over 50 million downloads, and its website enjoys over 160 million unique monthly visitors.

Because IMDb’s database is so expansive, it is a go-to place for movie and TV information, especially when users are looking for more detailed specifics. IMDb lists the full cast and crew for movies and TV, and provides links to the pages of actors and directors, as well as other crew members, showing their filmographies for a variety of different industry roles.

IMDb also provides useful MPAA rating information, release dates, set photos, movies stills, and trailers, as well as links to Amazon Instant for media that can be viewed online and a database of free online movies that are hosted on IMDb. The message board and comments system allows users to rate and review media, as well as provides biographical information, trivia, and quotes that can all be added and edited by users with manager approval.

IMDb hosts with Amazon CloudFront, which gives them the full flexibility and scalability of the cloud. Because the cloud exists across multiple servers at a time, it can adjust to spikes and lulls in traffic, allowing IMDb to meet demands when they are high, and scale back when they are low. As IMDb gets over 160 million unique visitors a month, this scalable, reliable hosting option is critical to keeping the site running smoothly.

IMDb definitely corners the market on Internet movie and TV references, and as its catalogue and features expand, it is likely that its domination will continue. Its partnership with Amazon is also adding further functionality in regard to the streaming of online video content for movies and TV shows, and while Amazon Instant may not be as widely used as Hulu and Netflix, the collaboration between IMDb and Amazon make this service more accessible to a wider audience.