Ireland’s economy isn’t reeling like it used to, but the cloud may prove to be the ol’ lucky charm.

The world’s economy is not doing too well, that’s a fact, and we see it in the headlines. And one of the economies which is struggling the most is the Celtic Tiger: Ireland. But the Irish are confident that they can recover again. Ever since Ireland gained its independence, it was never a strong economy until the 2000’s, once it joined the EU and attracted many technological companies looking for a stable place to outsource data centers and computer development. Now that the Irish economy is on the brink again, it is looking to play the same ditty and get the Emerald Isle back to jigging again. 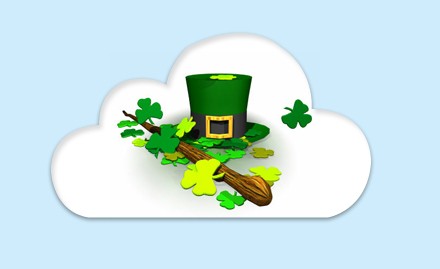 In order to improve the already existing market for data centers and attract more business, the Irish government is making steps towards creating and implementing newer standards which should give these organizations guidance in moving towards cloud hosting.

The Department of Enterprise and Jobs considers cloud hosting to be the “lucky charm” which might pull Ireland out of this rut and propel it into the future. To better attract businesses wishing to outsource hosting solution needs, the DEJ hopes to become one of the first countries to pave a clear, regulated, and substantial path towards general cloud adaptation. In a statement it said, “but one of the primary concerns with the emerging cloud paradigm is the lack of standards to guide its adoption and implementation.” With one of the biggest obstacles in major cloud adaptation being funds, and with a government backing a push towards cloud computing, it seems like this could actually pioneer the Irish and global tech industry.

The Irish Minister for Innovation, Richard Burton, explains that cloud computing is Irelands good hand and it’s still able to do some fighting. He explains, “A central part of the Government’s plan for jobs and growth is targeting key sectors where Ireland has competitive advantages and the potential to foster growth. One such sector is cloud computing, and various studies have reported that Ireland has potential to create high levels of growth and jobs in this sector if we move early.”

Note: Ireland is dedicated to improving its economy, just like NetHosting’s Dedicated Experts™ are there for you, twenty-four hours a day, seven days a week. Call or chat with them any time to have your questions answered.

He also believes by developing these standards which should help guide the growth of the cloud adoption, it will help more Irish businesses become cloud computing experts and will be able to offer marketable cloud hosting services and to pave ways to further innovative cloud hosting technologies.

To expedite this process, Ireland is increasing its IT business with India, optimistically increasing it to 2 billion euros within the next four years. It is now currently at 1.2 billion euros. On top of receiving products from India’s thriving IT market, it will also receive valuable advice and consultation on how to become an effective market for outsourcing.

The Irish government is also planning to increase tourism to attract at least 10 percent of tourists coming to the UK and sponsoring standardized university equivalent education to its citizens. These steps are in hopes of furthering its IT market by developing technologies for the tourism industry and educating IT professionals.

Until those computer geniuses come out, Ireland will be depending greatly on India’s “expertise” as Ireland ambassador Feilim McLaughlin explained at a press conference. He explained, “Ireland will benefit from Indian expertise as we don’t have enough people with the skill sets. We want to collaborate in high-technology areas.” And with business being two ways, Ireland also hopes to use its current IT infrastructure to combine Indian knowledge with Irish resources to create upgraded cloud and other IT technologies. McLaughlin finished, “Indian businesses should think of it as a place for collaboration.” He also voiced that one reason Ireland is a good trade partner is because it has lowered its corporate tax rate to 12.5 percent, one of the lowest in the European Union.

While the cloud is beneficial for saving companies money, increasing flexibility and scalability, is modern and reliable, it has no become the pot of gold on the other side of Irelands economic rainbow.