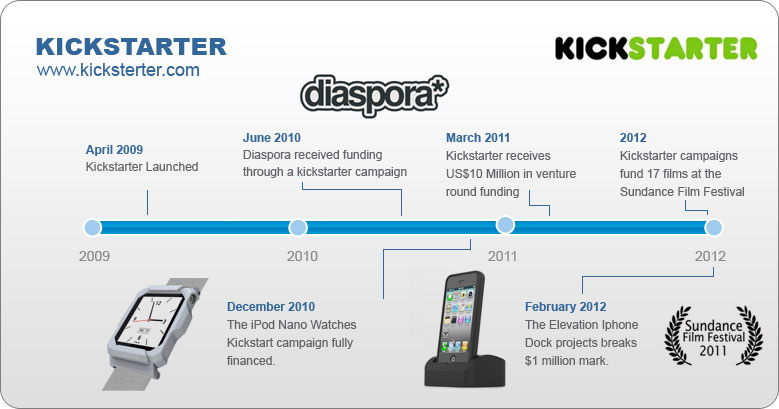 Kickstarter is a means for creative minds to propose ideas for projects, set a monetary goal for fundraising, and receive financing for these projects from individual donors and pledgers.

Kickstarter is a platform for various creative minds to pitch their projects and bid for funding from private investors. Based in New York City in the lower part of Manhattan, Kickstarter is a rapidly growing outlet for funding creative projects from new albums to independent films. Kickstarter looks like it’s here to stay with the value of donations growing and the percentage of successful projects increasing.

Kickstarter was originally founded by Perry Chen, Yancey Stickler, and Charles Adler and was designed to give creative minds the short term monetary boost they needed to reach their goals. The creators were inspired by the stories of legends such as The Beatles and George Lucas; people who had more ideas than they had funding or resources for, yet despite their circumstances made it to the top. As Yancey Strickler explained in his Tumblr post, Kickstarter is, “…a way to break beyond the traditional methods — loans, investment, industry deals, grants — to discover that we can offer each other value through creation without a middleman dictating the product and terms.”

Investors have helped keep Kickstarter running. The usual big name investors such as Union Square Ventures pitched in as well as some private venture capitalist firms. Some social media celebrities also helped Kickstarter with their initial funding such as Jack Dorsey of Twitter, Zach Klein of Vimeo, and Flickr co-founder Caternia Fake.

Although Kickstarter emerged onto the scene on April 28, 2009, it wasn’t until 2010 that it achieved “mainstream” status. Having earned US$28 million in pledges for the year, the site boomed with artists, engineers, designers, and writers all vying for donations and sponsorship. In 2011, the amount of funds raised and proposed projects have increased exponentially, with the total amount of money donated coming approximately to US$100 million. So far, there have been over 27,086 projects proposed and 11,800 of those have reached or passed their fundraising goal, about a 46% success rate, and about US$130 million acquired through fundraising.

A few milestone projects have been TikTok’s and Luna Tik’s raising US$942,578 in December 2010 in a team effort to create watches out of Apple’s iPod Nano. The most recent and groundbreaking projects have been the Elevation iPhone dock developed by Casey Hopkins which was the first project to break the US$1 million mark on February 9, 2012. Within a few hours, Double Fine Productions acquired over US$1 million to finance their development of an independent video game, Double Fine Adventure.

The term coined to describe Kickstarter is “crowd funding.” The donations or investments are extremely “finite” as Perry Chen describes it. The pledgers’ investments don’t grow and they don’t receive anything in return except for maybe a small incentive. And the people behind the projects only get a certain amount of money acquired in a specific amount of time, i.e. no continual investment. Users are also able to donate to local projects by typing their city into a search bar located at the bottom of the homepage.

Kickstarter uses a provision point mechanism to raise and distribute funds to projects. When a project is submitted, one of the requirements is to set a monetary goal that needs to be reached. If that goal is not reached, the project will receive no funding. For example, an industrial designer wants to make a lamp that is also a speaker dock for Apple/Android devices. The designer estimates that in order to produce a sufficient amount of products, he/she will need about US$500,000, so he/she will set that as the goal. After proposing the idea through photos, writing, and film, the designer is left to the mercy of donators. If this project receives the US$500,000 it was hoping for within 60 days, the project is financed. If it only reaches US$375,000 however, the project will not receive any funding and the prospective donators won’t be charged.

According to its guidelines, funding must be for specific creative projects i.e. an album or a book. The projects cannot be open ended such as funding causes or services. They must also fit into the established categories such as art, design, film, photography, music, technology, publishing, fashion, food, and theater. Although Kickstarter has laid basic ground rules and parameters around the types of projects and fundraising methods, there is a substantial amount of freedom given to the organizers. One example is the growing trend of giving incentives according to how much a donor gives. Five dollars might give the donor a thank you card while $25 might give you a signed album.

While Kickstarter’s server architecture is largely undisclosed, they are hosted by Amazon’s EC2 service; a cloud hosting solution. Utilizing a cloud hosting strategy is typical for newer online companies. The flexibility that comes with cloud hosting allows Kickstarter to handle the different levels of traffic it receives and avoid downtime due to traffic spikes. And because it is easy to deploy additional servers in case more resources are required, Kickstarter can display content-heavy data such as high definition video or photographs.

Cloud hosting is also very efficient financially speaking. Kickstarter receives 5% of the donations that are contributed which really isn’t very much. It can’t afford to waste resources or power, and cloud hosting gives them the option of paying only for what they need at that specific time. Kickstarter also uses Amazon Payments to complete transactions between contributors and organizers.

Kickstarter continues to be the means of funding thousands of creative projects. Loads of blooming creative minds are proposing new and fresh ideas on this unique site, hoping to have their projects financed. With over US$130 million in donations garnered in its first three years, and with ground breaking projects such as the iPod Nano watches being funded through this mean, who knows what other creations and innovations will hit the markets or the charts.