Note: LinkedIn solves its hosting problems in the cloud. Sign up for cloud hosting from NetHosting today to start receiving the flexibility and scalability your website needs to reach more customers.

LinkedIn has gotten a bad wrap in the past, as far as social networks go. From complaints about the user interface to a lack of activity from the network’s users, some people haven’t gone to the site since they registered for it. However, those seem to be the opinions of those who haven’t really buckled down and given the site a chance. We talked about the incredible value of LinkedIn on our online marketing blog, and personally, I find great value in the professional social network. I like it even better now that yesterday, the company released a sleek and useful iPad app. 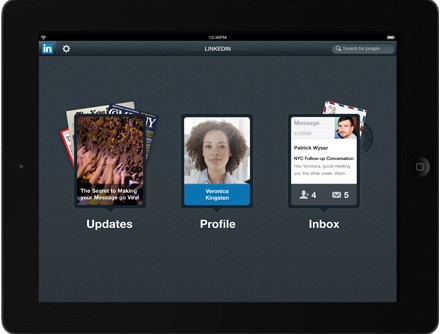 The mobile market has been a growing niche for the professional social network since last year. In August of 2011, the company had its first earnings call and announced that it was adding two new members to the network every second (which, if anyone’s keeping track at home, is one member more per second than the company claimed to be growing in November 2010). From the same earnings call, the company reported that the mobile pages of the site saw a 400% traffic increase that year and received more unique monthly visitors than MySpace and Twitter.

Note: While you’re developing an app that rivals the traffic of Twitter, we’ll stick with hosting it. Choose NetHosting for your app hosting needs to receive support from representatives who care about your success.

To further the success the company has seen with its mobile pages since last year, LinkedIn released its iPad app yesterday. Again, those unfamiliar with the company’s mobile success might dismiss the announcement and the release, but thus far, users’ reviews have been incredibly positive. Although the app is over two years late (i.e. the iPad is over two years old), it boasts an easy-to-use interface and a really aesthetically pleasing layout.

The app development team explained that it relied heavily on analytics to find out exactly when users visited the site and what needs the app could fill. They found that LinkedIn users mostly visited the site very early in the morning, what the developers dubbed “a coffee session.”  Also, traffic for the site peaked between 7 and 11pm. So, LinkedIn employees went to work designing and coding an app that would help users start and end their day.

When using the app, you’ll still see the updates section, to see what your connections have been doing since the last time you logged in. Other information in the update section includes who has changed jobs and who has viewed your profile. Finally, the section offers a glimpse of what members of your groups have been discussing. Of course, you can also get to your profile with a single click from the home screen of the iPad app. Furthermore, you can view your connections, invitations, and messages from the home screen.

A new feature that professionals may find most helpful is a sync feature between your device’s calendar and your profile information. Don’t worry, this won’t share your schedule with your LinkedIn connections. Instead, it searches the contacts listed in your meetings from your calendar on LinkedIn, and gives you information from their profiles (as long as you’re either connected with them or the information is public) as little blurbs on your calendar. Again, this comes from the analytics which showed the development team that most users use the social network right before meetings for that exact purpose, i.e. to look up who else would be in the meeting with them.

In addition to the app, LinkedIn has launched touch.linkedin.com as just a iPad-friendly mobile site. Currently the app is only available in English, but the company has already said it is working on the app in other languages and will release those versions in the near future.

If you’re interested in reading how LinkedIn manages the back-end of its website and how it all began, take a look at our case study about the professional social network.