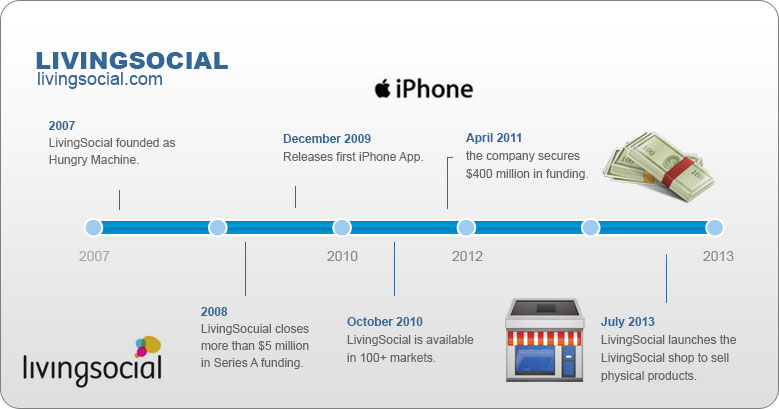 Bandwidth (Why Low?): Although LivingSocial has a lot of users, it only needs to provide enough bandwidth for simple browsing, and sending daily deal emails to customers does not require too much bandwidth.
CPU (Why Low?): The LivingSocial website displays a lot of images and text describing its deals, and the main functions the website performs are completing transactions, providing and collecting location information, and regular updates, all of which don’t require too much computing power.
Disk (Why Medium?): LivingSocial stores the credit card information of its customers so that deals can be purchased; however, it really only keeps basic information about its clients, so there is no need for a significant amount of disk space.
RAM (Why Low?): Giving users access to information about local deals doesn’t require too much RAM as LivingSocial deals are relatively simple and generally contain basic text and a couple of images. While the website will appear different to certain users according to their location preferences, these functions don’t require a large amount of RAM.
Scalability (Why High?): As LivingSocial is now using an Open Cloud System and using an elastic cloud infrastructure, it has the ability to adapt to spikes in traffic and scale back when the demand is low.

LivingSocial is a website created for users to find deals in their local area. By coordinating with businesses, LivingSocial is able to offer local and national deals to customers, and now has over 70 million members worldwide.

In 2007, LivingSocial was founded by four Revolution Health employees. It was originally called Hungry Machine and developed Visual Bookshelf and Pick Your Five, both of which received a total of 85 million Facebook downloads. In 2008 LivingSocial secured over $5 million of funding with help from Grotech and personal investments, and released its first iPhone app and daily deal in 2009.

The social deals site saw booming growth in 2010 and 2011 with investments from Amazon and Lightspeed Venture partners, for a total of $183 million, and expanded its reach to London. Throughout 2011 the company secured over $400 million in investments, and acquired daily deal businesses across the world to expand its reach. During this time, it also launched new deal categories by introducing family activities and food options for certain cities, making it more user-friendly.

In 2012, LivingSocial started to sell physical products as well as deals, and now boasts over 70 million users and a presence in over 613 markets worldwide and 19 countries. LivingSocial’s 4500 employees work across the world in all the cities in which the site offers deals.

LivingSocial allows users to search for deals in their local area based on certain preference categories. There are a variety of different kinds of deals in its marketplace, ranging from local restaurant vouchers to international vacations.

Businesses can choose to partner with LivingSocial in order to have their deals and vouchers appear on the site. In order to purchase a LivingSocial deal a customer has to create a member account or sign up with Facebook, and they are then able to browse deals in their local area. To make the final purchase of a deal, the customer must enter their credit card information. Once the deal purchase has been processed, the customer is emailed a confirmation and a voucher to redeem the offer, or given further instruction on how to book flights or a vacation.

LivingSocial has mobilized social media functions to spread its business and encourage users to connect their LivingSocial and social media accounts. For some of its deals purchasers have the option to receive their deal for free if they share a link on Facebook and a certain number of friends buy it. This gives users incentive to share LivingSocial deals and vouchers.
In addition, when users sign up for a membership or download the LivingSocial iPhone application, they have the option to receive daily deals and notifications. This allows users to keep up-to-date on LivingSocial’s best deals in their local area and helps the merchants that partner with LivingSocial to expand their reach.

To sum up its features, LivingSocial’s main objective is to provide local deals to users and to give merchants an opportunity to expand their businesses. By using social media, LivingSocial has been successful in spreading the word about its products and services.
System

There isn’t much information about LivingSocial’s server infrastructure, other than they started hosting with Rackspace in 2008 as a result of its huge expansion. As of March 2013, the company is implementing an elastic cloud infrastructure with Cloudscaling’s Open Cloud System, powered by OpenStack technology.

LivingSocial has grown in popularity, and is now one of the leading providers of Internet deals and coupons. With its expansion to activities and experiences, and the addition of its online shop, it is set to continue growing, especially since they are effectively utilizing social media in promotions.

Goodin, Dan. “Why LivingSocial’s 50-Million Password Breach is Graver than You May Think.” Ars Technica. http://arstechnica.com/security/2013/04/why-livingsocials-50-million-password-breach-is-graver-than-you-may-think/.
(2 May, 2013).

“Our Company.” LivingSocial. http://corporate.livingsocial.com/ourcompany. (2 May, 2013).

“Partner with Us.” LivingSocial. https://getfeatured.livingsocial.com/getfeatured/us. (2 May, 2013).