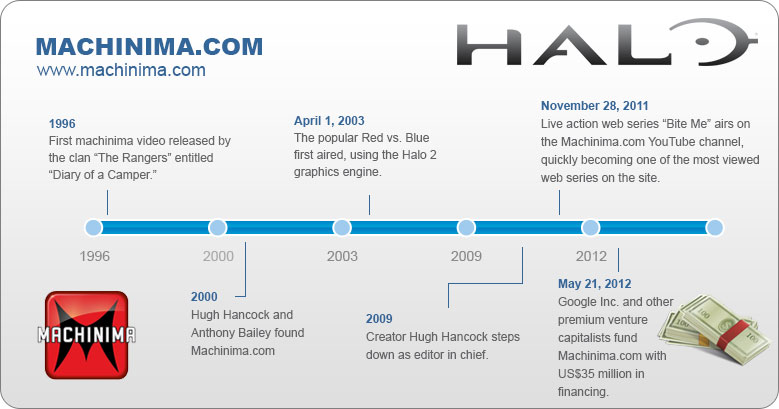 Machinima Inc. is the biggest name in online entertainment and updates for the video game community.

Machinima is a type of film making where the artist will use video game engines and graphics to convey a story, typically starring characters of those video games. It began in 1996 after a group of independent gamers named “The Rangers” created a short film using the demo function on Quake to record a film entitled “Diary of a Camper.” It wasn’t much longer other gamers began creating their own films using Quake and other videogames.

In 2000, Hugh Hancock and Anthony Bailey, two machinima artists, developed Machinima.com in order to give this new film genre a place to be viewed and shared. The site took off and is still growing at an incredibly fast rate, hosting independent short films, series, and now live-action films, with over 1.9 billion views as of June 2012. The machinima film industry is largely carried on Machinma.com’s shoulders has become integral to the gaming community. On May 21, 2012 it received US$35 from big name sponsors during a financing circuit such as Google Inc., Redpoint Ventures, and MK Capital.

One of the more successful Machinima Inc. projects was “Bite Me,” a live-action web series featuring three gamers who find themselves in a zombie outbreak. Due to their extensive gamer experience, they become top-notch zombie killers and survivalists. “Bite Me” gained over 15 million views on YouTube. Eventually, Lionsgate Entertainment supported “Bite Me” as well as partnered with Machinima Inc. for its second season.

Machinima Inc. has five different channels on YouTube which are dedicated to showing different footage ranging from sports games, trailers for future games, and other short films. YouTube is the means Machinima.com uses to stream and distribute all of its films. With millions of gamers comprising its viewer pool, most of its videos spread over several different channels and receive hundreds of thousands of views within days of their releases. Once Machinima.com releases a video, it’s bound to become viral.

On top of YouTube, Machinima.com utilizes other social media facets to spread updates and news about new content on its channels and website. Machinima.com uses its Facebook profile pages to distribute news and advertise its YouTube channels. And its Twitter account gives you on-the-go updates on new trailers and happenings in the gaming world. Machinima.com’s Inside Gaming Blog keeps gamers up-to-date on gaming news and event coverage.

Machinima.com has also expanded from the desktop monitor to spending most of its funding in exploring how to stream its content to other devices. The new Machinma.com app allows you to watch and interact with Machinima.com entertainment from Apple products, Android devices, and Windows phone. And users can use Boxee, Roku and eventually Samsung Televisions to watch Machinma.com videos on the home television.

Machinima Inc. isn’t too open about its backend, but since most of its content is viewed over YouTube, it doesn’t have to implement too extensive of a server architecture. When investigating the website, the site is heavy with its Javascript frameworks. Most of the online storage used is hosted by Amazon Web Services. This cloud-based online storage solution gives Machinima Inc. more than enough scalability at an affordable cost.

Machinima.com is the main entertainment network for the gamer community. Starting out as a place to organize and gather homemade videos using video game graphics as the medium, Machinima.com has branched out to producing original content and becoming the leader in gamer news and developments.