Note: The power of the Internet is amazing! To harness that and help your social change project go viral, you need a website from a reliable cloud hosting provider. Check out NetHosting’s products today.

Facebook users can post whether they’re organ donors or not, and since yesterday, one registry has seen an 800% increase in organ donor sign-ups.

Facebook now has about 900 million users, with more people registering every day. Suffice it to say, if Facebook has an agenda to push, it will probably be successful. Even so, when Mark Zuckerberg and chief operating officer Sheryl Sandberg announced yesterday that Facebook would allow users to display if they were organ donors on their timelines, it seemed like an odd social issue to tackle. Many thought that the largest social network in the world would focus on the problem of cyberbullying that has been in the national spotlight recently. 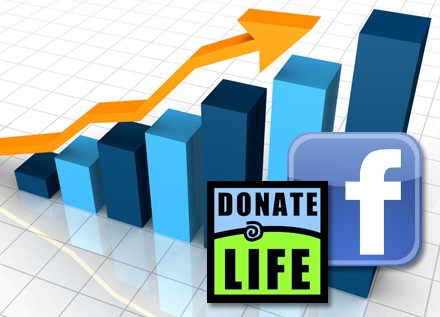 Users can add an organ donation event on their timeline if they so choose as well as a story along with (which is also optional). If they’re not an organ donor, users will be given a link which will redirect them to the registry page in the location they live. Zuckerberg and Sandberg demonstrated adding their own organ donation events to kick-off the feature. Right now, this feature is available in the U.K. and the U.S., but the company has plans to expand the feature to be available in other countries in the near future.

Zuckerberg cites the death of Steve Jobs as an inspiration to start this project. Jobs died in October of pancreatic cancer. The U.S. Department of Health estimates that there are over 114,000 U.S. citizens waiting for organ donations, and that on average 18 people a day die waiting for organ donations. The social network’s plan isn’t to just raise awareness however, it is hoping to affect actual change and see those numbers drop.

Despite skepticism from cynics (myself included), the number of organ donors has risen exponentially. In California, the organ donor registry is managed by a group called Donate Life. The organization reported that from yesterday to today alone, it has seen an 800 percent increase in online donor sign ups. Literally. 800 percent.

Some have labeled this as social peer pressure, saying that people will feel compelled to become organ donors even if they don’t want to. However, Facebook isn’t forcing users to declare organ donation or not, nor does it draw extra attention to anyone who doesn’t publicize their organ donation preference. It seems like the company is just trying to help a good cause (although undoubtedly boost ad revenue along the way).

Although, there could be a downside to publishing this information on your public social networking account. If your profile isn’t private to the public, you could be contacted to make an under-the-table exchange of cash for a liver, which is illegal in the United States. The hypothesis may seem paranoid but hey, this is the Internet. Weirder things have happened.

Thankfully, Facebook has a pretty good track record with helping instead of hurting in other similar circumstances. After the 8.9 magnitude earthquake (followed by a devastating tsunami) in Japan last year, cell carriers in Japan had to limit how many calls could be made due to damage to their own hardware and the incredible influx of voice call traffic that they couldn’t manage. Instead of taking to the airwaves, many Japanese citizens took to the Internet (which was also spotty due to ISPs hardware damage throughout the country). Citizens used Facebook and other social networks to try and identify some of the 500 people that were reported missing.

Regardless of how you feel about organ donation, it’s undeniable that the change Facebook has managed to affect in California alone is amazing, and proves again the power of the social network in today’s information age.

If you’re interested in reading more about Internet companies getting involved in charities, check out our blog post about YouTube’s philanthropic work.