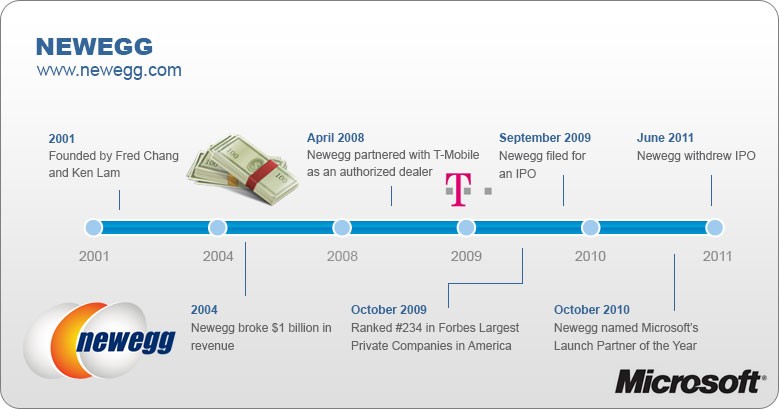 Founded in 2001, Newegg is the leading online electronics retailer in the USA.

Newegg is a leading e-retailer for electronics-focused products in the United States. They are headquartered in City of Industry, California and offer a variety of merchandise, from computer components to pet supplies.

Newegg was founded in 2001 by Fred Chang and Ken Lam. They chose that name in light of the dot-com bubble that had recently burst, and wanted to create a symbol of new hope for e-commerce. In 2005, Newegg.com was selected as one of the Internet’s top 10 retailers by Internet Retailer Magazine after breaking $1 billion in sales during 2004. Since then they have gradually expanded, launching NeweggMall for non-electronics goods like clothing and auto parts in July 2008, Newegg.ca for Canadian customers in October 2008, and NeweggBusiness.com for corporations, resellers, schools, and non-profits in 2009. In 2010, NeweggMall became Newegg Marketplace, and the company surpasses $2.5 billion in sales that year.

Since its inception, Newegg has consistently turned a profit with every passing year. It filed for an IPO in 2010, but that was withdrawn in 2011.

In 2010, Newegg unknowingly distributed 300 counterfeit Intel i7 processors to their customers, which they had received in a batch of 2000 units from their supplier D&H Distributing. As a result, Newegg terminated the business relationship and worked quickly to replace all imitation units at no cost to their customers. That same year, Newegg was named Microsoft’s Launch Partner of the Year based on the company’s commitment to the launch of Windows 7 and Office 2010.

Newegg’s home page offers all of its shopping categories at a glance in the left sidebar for quick browsing. In the upper search bar, you can perform an inquiry based on keywords, model number, or item number. Pages take about 2 seconds to load, allowing for quick turnaround if you want to further filter your search. When looking for computer components, users are able to filter their searches by every variable possible. Motherboards, for example, can be filtered by price range, manufacturer, board size, CPU type, RAM type, SATA speed, audio and video outputs, and more.

To make purchases on the site, users must create a personal profile that stores their information such as payment methods, delivery addresses, order history, and rebate documents. Users can also set up wish lists that others can use to buy them gifts, price alerts for when selected products fall below certain prices, and notifications for when anticipated products become available.

Their prime draw for repeat visitors is their “Shell Shocker” program. Every day at regular intervals, special sales become available for the remainder of that day only. These products are heavily discounted and from different categories on the site. One day may feature disks, RAM, and a Bluetooth headset; the next may have a laser thermometer, a video card, and a power supply. This keeps customers coming back for more.

Since Newegg itself sells server equipment and certainly has in-house experts available to service them, it’s a very short leap to conclude that they colocate servers with a local host. In fact, their hosting provider Internap maintains such a data center in Los Angeles, a short 30 minute drive from Newegg’s headquarters in Industry.

The reason colocation works best in this case is because, if they were to use dedicated hosting instead, they would have to pay more per month because of the equipment usage cost. But since they have access to electronics suppliers, they can get server equipment at wholesale prices. Not only that, but they can also swap in and out components like RAM and processor power whenever they deem it necessary (like during holiday sales). Colocation customers just pay for the three P’s: ping, pipe, and power, or assigned rack space, bandwidth, and electricity, respectively. The savings against dedicated hosting can quickly outweigh the cost of server hardware in this situation.

Newegg also uses Amazon’s S3 (Simple Storage Service), which is a section of Amazon Web Services. S3 is pay-for-what-you-use cloud storage, so it’s likely that Newegg either uses it for interoffice storage or for storing any product information that they aren’t using on the servers at the moment.

Since it was founded, Newegg established itself as the first place to look when you’re searching for electronics. And since it has enjoyed very little competition with other online-only retailers (aside from Amazon.com), it will continue to benefit from its specialized focus. And since the computer industry does nothing but grow, it’s reasonable to expect that Newegg will grow with it.