Note: We might not have a supercomputer, but we do have unparalleled support with our hosting packages. Try dedicated hosting with NetHosting to get that power and speed but for much less than it would cost to run a supercomputer.

Lawrence Livermore National Labs built the world’s fastest supercomputer, Sequoia, and has now built another to rent to businesses.

I just can’t help myself; I geek out about supercomputers. I’m fairly confident I don’t even understand the implications of the calculations they run for biotech companies, national defense, and other purposes, but I still love the idea of a computer with enough brain power to potentially take over the world (or so I like to imagine). And now, Lawrence Livermore National Labs (LLNL) has announced they have a supercomputer for rent. 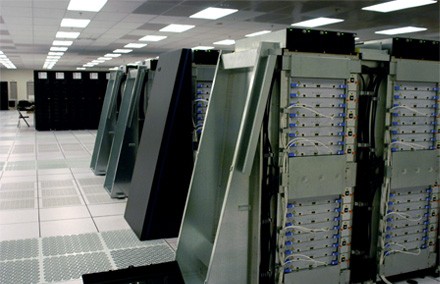 World domination might not be attainable with a supercomputer, but if you run an engineering company or finance firm, a rentable supercomputer might be exactly what you need to crunch some extra numbers. Smaller companies could really benefit from the predicting a supercomputer could provide but they most likely don’t have the funds or know-how to build one themselves. Now LLNL is providing the perfect solution.

Note: Most of the time, an unspecific price tag can be infuriating. With cloud hosting from NetHosting, your bottom line depends entirely on the resources you use. Pay only for what you use, and not a penny more.

On Wednesday, IBM and LLNL announced a brand new program called Deep Computing Solutions. The whole goal is exactly what Vulcan is doing: providing temporary supercomputing for the masses at an affordable price. LLNL has a High-Performance Computing Innovation Center that is hosting the Deep Computing Solutions project. Previously, LLNL only worked with private partners to simulate nuclear explosions. The director of the center, Fred Streitz, was quoted as saying: “The laboratory has a long history of working with industry, but not pointedly on their problems. What’s different here is we’re pointedly trying to address business issues.”

For the past year, Livermore has worked with companies to try and accomplish Streitz’s goals. Companies included the U.S. Air Force, Navstar, Energy Exemplar (a company needing the supercomputer to run electric grid simulations), and an unnamed company trying to make 18-wheelers more fuel efficient.

Vulcan won’t fully be online until early in 2013. Again, the supercomputer doesn’t match up to Sequoia but it can run at five petaflops, which is five quadrillion calculations per second. That is about the same speed as the fourth fastest supercomputer in the world, which is not too shabby, to say the least. For comparison’s sake, Sequoia can bust out sixteen petaflops. Seriously. Not to mention that a flop might be the unit of measurement with the best name in the history units of measurement. Leave a comment with any other suggestions.

One of the understated resources of working with LLNL is that companies will have access to the brains behind the operation that runs Vulcan and Deep Computing Solutions. These computer scientists know how to optimize what companies want to run and do to best take advantage of Vulcan’s hardware and software. Contrary to what some might think, supercomputers are much more complex than simply a really powerful, giant dedicated server in a room somewhere. IBM program manager James Sexton pointed out: “It’s no longer an issue about the computers itself, it’s an issue about the expertise. What we’re offering is not just a computer, but also some of the best minds in the world.”