What Really Happened To PayPal Credit Customers Will Make You Cringe

Last Tuesday, PayPal was hit with a complaint from the Consumer Financial Protection Bureau (CFPB) accusing the company of using deceptive practices with its credit product, PayPal Credit, formally known as Bill Me Later.

As a result, PayPal now owes $15 million in reimbursements and a $10 million fine to the CFPB’s penalty fund.

PayPal Credit isn’t a normal credit card, it’s a revolving line of credit offered by Comenity Capital Bank that people can use to make purchases online. Many users unknowingly registered for PayPal’s line of credit, only to find out months later when they started getting calls from debt collectors harassing them about overdue balances and unpaid late fees.

That’s because the sign-up process was alarmingly simple – often users would make a purchase with PayPal and forget to uncheck a box, which activated a new credit account. In other cases, users had no idea that purchases were automatically being withdrawn from their PayPal Credit account instead of their preferred bank.

According to the CFPB, PayPal Credit has been taking advantage of consumers for years in extreme ways. Here is a complete list of the charges that PayPal Credit is accused of, taken from the CFPB statement released Tuesday:

PayPal Credit failed to honor advertised promotions, such as a $5 or $10 promised credit toward consumer purchases.

Enrolled consumers in PayPal Credit without their knowledge or consent

The company automatically set or preselected the default payment method for all purchases made through PayPal to PayPal Credit. This meant consumers used PayPal Credit even when they intended to use another method of payment such as a linked credit card or checking account.

PayPal Credit failed to post payments or failed to remove late fees and interest charges from consumers’ bills even when the consumers were unable to make payments because of website failures. Numerous consumers reported that the company lost payment checks or took more than a week to process checks.

The victims of the PayPal Credit nightmare will soon be compensated, but only after several years of mistreatment and dinged credit scores. Complaints about the credit service are littered throughout the net, and possibly serve as the reason for ultimately destroying PayPal Credit’s reputation.

@PayPalCredit I didn’t authorize paypal credit to pull a hard credit inquiry. Unacceptable that this happened.

So upset w/ @paypalcredit & @paypal. Former sent some vague mails abt acct. BUT Paypal showed ZERO due_Now seems I am past due #SCAM #Fail 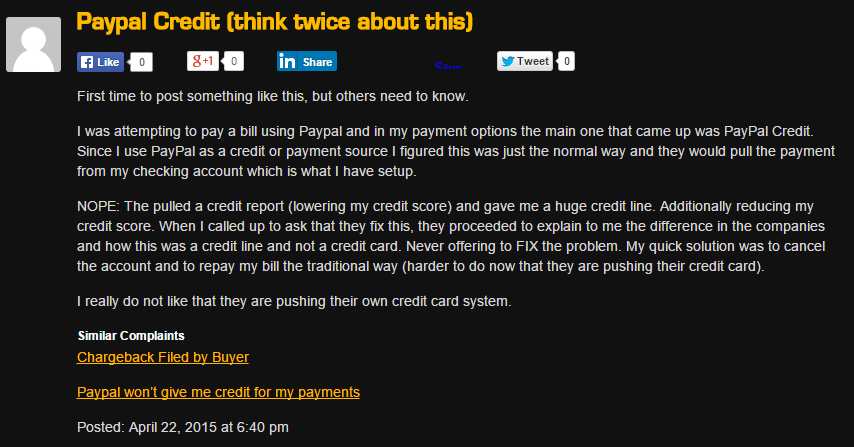 How To Receive Compensation From PayPal Credit

As part of the settlement, PayPal Credit will have to clearly and prominently disclose that the service is a line of credit through a pop-up box or other method. PayPal Credit will also no longer be set as the default payment method for a consumer’s PayPal account unless the consumer gives consent first.

If you used PayPal Credit and you think you may be entitled to a refund, you could be eligible if you incurred late fees or interest charges between January 1, 2011 and May 1, 2015. Affected customers won’t have to do anything, as PayPal is required to provide the CFPB a redress plan on how customers will be compensated.

To read more about the PayPal Credit case, visit http://www.consumerfinance.gov/newsroom/cfpb-takes-action-against-paypal-for-illegally-signing-up-consumers-for-unwanted-online-credit/