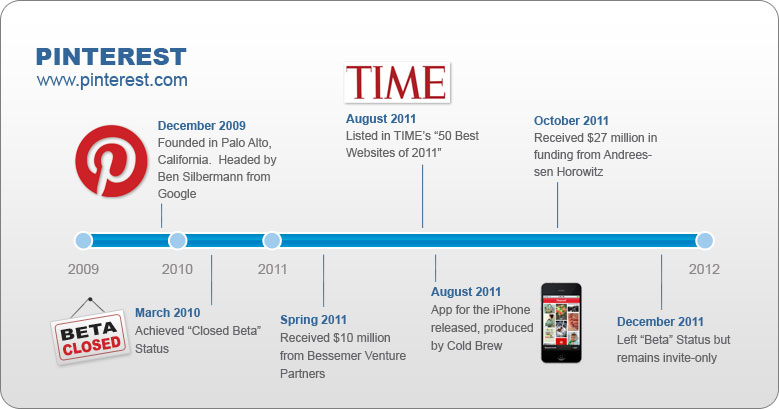 Pinterest is a “self-expression engine” where millions of users can “pin” anything that interests them to their own virtual pinboard and share those “pins” with others, from recipes, to craft ideas, to fashion, and more!

The online-scrapbook and virtual pin board, Pinterest, has been the source of countless creative ideas and self-expression for thousands of users since 2010. The company’s stated mission is to “connect everyone in the world through shared tastes and the ‘things’ they find interesting.”

Based in Palo Alto, California, Pinterest has now become the 9th most popular social site on the web and continues to attract users from all ends of the creative spectrum. From the future bride to the professional architect, users all over the world are “pinning” pictures and ideas onto their profile, inspiring and receiving inspiration from others.

The Pinterest project began in December 2009 with former Google display advertising designer Ben Silbermann at the head, supported by Paul Sciarra of Radius Ventures and Evan Sharp, former Facebook product designer. Silbermann explained their reasoning behind Pinterest, stating, “All three of us shared the idea that the things you collect say a lot about who you are. We were excited about having a place online where we could not only collect our favorite things, but also share those collections with anyone.”

In March 2010, Pinterest started operation under closed beta status. It remained an invite-only website until December 2011, when interested users were allowed to request invites from the site itself. Although the ability to expand Pinterest’s membership was somewhat limited with the invite-only clause, its growth was alarmingly exponential. While in its beta stage, Pinterest accumulated over 1.5 million users with approximately 3.8 million views per day.

As startups go, Pinterest was well financed with about US $10 million from Bessemer Venture Partners, which put the company value to around US $40 million. The founders received even more funding from a group of private entrepreneurs, the majority of whom were based in Silicon Valley. In October 2011, they received US $27 million of additional financing from Andreessen Horowitz, which raised the company value to US $200 million.

Since then, Pinterest users have grown to over 4 million strong. In August of 2011, Pinterest was ranked number 38 in TIME magazine’s “50 Best Websites of 2011” and released an app for the iPhone, produced by ColdBrew Labs. An Android app has yet to be released.

Pinterest is aptly described as a virtual pinboard where users can pin images, quotes, recipes, and more. Many subscribers use pinboards to plan weddings, decorate homes, find creative recipes and styles, and look for creative inspiration. Consequently, the majority of Pinterest users are females between the ages of 25 and 44 with a special enthusiasm for arts and crafts.

Using Pinterest is fairly simple. While browsing online, users can click the images that interest them, open the CreatePin browser, and simply drag the image onto the specified plot. There, the user can enter a description of the image and sort the newly created pin onto one of their various pinboards.

Following other users’ boards has become just as much of a hobby, if not more so, than customizing one’s own board. Users can follow strangers’ and friends’ pinboards by receiving Facebook-like updates. Pinterest offers an application called “Tastemakers” which helps subscribers follow favorite big name designers, artists, writers, and other creative minds and glean from their creativity.

Sahil Lavingia, a former Pinterest designer, calls Pinterest a “self-expression engine,” a virtue which actually makes some users apprehensive of the potential side effects. Lavingia explains, “What self-expression engines have in common is that their users are the product – their business model ultimately rests on selling advertising based around hyper-targeted user interests. Therefore, they need a robust dataset to sell ads against.”

In short, many subscribers are worried that Pinterest will eventually take what they have readily expressed about themselves and use it against them in the form of targeted advertisements, but that hasn’t stopped the visitors from pouring in. Over the 2011 Christmas season, Pinterest attracted over 11 million visitors in one weekend and is steadily climbing up the Alexa rankings.

Currently, it is ranked as the 181st most visited site in the world and 40th in the United States, where at least 75% of its traffic is generated, with especially high traffic volume originating from California, Texas, Utah, Tennessee, and Alabama.

Cloud servers provide Pinterest with the scalability to handle massive fluctuations of traffic while also creating an efficient and dependable service. The cloud allows Pinterest the cost-efficiency and scalability to grow in tandem with its user base while remaining a fairly small organization, by its own estimation.

Founded in 2009, Pinterest has quickly become one of the most popular social networking sites on the web. It has impressed many web trackers by acquiring millions of users and counting, becoming one of the top 50 most trafficked websites in the US and receiving substantial financing from big name investors. All the while, Pinterest has remained a join-by-invite website, growing in popularity by word-of-mouth advertising. Using a flexible cloud hosting platform, Pinterest can effectively provide users a unique and apparently addicting service.