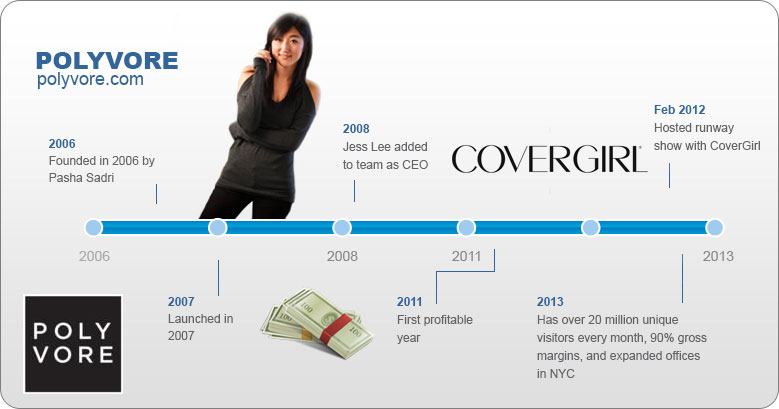 Bandwidth (Why medium?): Because Polyvore only deals with pictures of clothing and text-based information, it does not need a high bandwidth. The amount of traffic garnered makes it medium.

Disk (Why medium?): Polyvore stores lots of information, including social networking and the database of clothing that gets shared between users. However, the information comes in smaller files, making less of a need for a higher disk size.

RAM (Why high?): With 1.4 million new sets created by users each month, Polyvore needs a lot of RAM to search through the amount of information it has in its database.

Scalability (Why high?): Polyvore needs to account for spikes in traffic during seasonal changes in fashion. Because it has its own dedicated servers, we can assume much of its space isn’t used during the year, allowing for lots of room when traffic dramatically increases.

Polyvore combines the best of social networking with ecommerce. Because of its expansive database of clothing items, users can choose from millions of different pieces to create one personalized outfit, then like and message other users. Polyvore also offers a unique tool called the “clipper,” which will digitally cut the outline of a clothing product from an image and add it to your virtual “closet.” Polyvore generates revenue both through investors and advertising within the site. The site has over 20 million unique visitors each month.

Polyvore was founded by Pasha Sadri, former software engineer at Yahoo, in 2006. The site first launched in 2007 after Sadri brought fellow Yahoo coworkers Jianing Hu and Guangwei Yuen on board. In 2008, Jess Lee was added to the team as the CEO, and was also given an honorary co-founder status.

In 2009, Polyvore reached 4 million unique users. By then, they had 3 major investors: Matrix Partners, Benchmark Capital, and Harrison Metal Capital.

2011 was Polyvore’s first profitable year. The website was also spotlighted in Time magazine’s 50 Best Websites of 2011 and Entrepreneur magazine’s 100 Most Brilliant Companies of 2011.

In February 2012, Polyvore, in collaboration with CoverGirl, attempted to fully join in the ranks of high fashion by hosting its own runway show during Mercedes Benz Fashion Week. The show was live streamed on Polyvore’s website, and had about 15,000 viewers tuning in. Later that year, Polyvore opened an office in New York City, expanding from its original southern California location. Also in 2012, it was showcased in Fast Company’s 50 Most Innovative Companies of 2012.

Currently, Polyvore has 20 million unique visitors viewing the site every month, and has over 90% gross margins. The co-founders consider their product to be a “fashion democracy,” including more than just the elite of Paris, Milan, and New York City into high fashion.

Using the clipper tool, users are able to digitally cut an object from its background, like virtual scissors. Users pull individual items from a website using the clipper, and then deposit it in their online closet. They can then mix and match items, creating entire “looks” with an outfit, makeup, a model, and other inspirational artistic pieces. The site offers a social aspect: users like each other’s products, message each other, and create groups of their favorite Polyvore accounts, similar to Facebook. Polyvore also acts as a type of online magazine: they publish spreads with different themes and articles to their homepage.

Because Polyvore uses 157.935 GB of bandwidth every day, it uses at least five of its own dedicated servers, located in southern California.

Having your own servers makes scalability risky, but with nearly 400,000 viewers a day and large spikes during the holidays and fashion seasons, we can assume that much of Polyvore’s server space is redundant. Polyvore hosts with Level 3 Communications, which specializes in rich media content, Polyvore’s main commodity. Using dedicated servers as its main solutions gives Polyvore more control, as well as the ability to manage high levels of traffic.

Polyvore is changing the fashion industry by making it more of a “democracy,” but it still has competition with other ecommerce social media platforms, like Pinterest. However, investors, collaborating with merchandisers to create events and contests, and fans will ensure the continued success of this website.