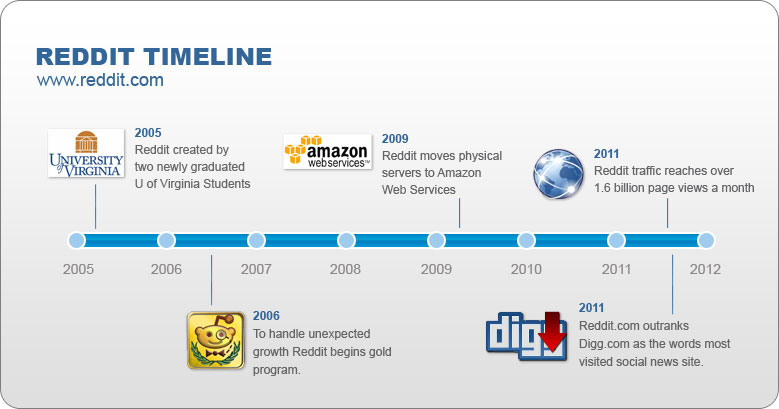 Reddit is a booming social news site with close to 1.6 billion page views a month.

In 2005, two newly graduated University of Virginia alums created a website, Reddit.com, where users submit content and then vote up or down on content submissions from other users. Users have the power to decide what is or isn’t important and visible on the website. In April 2011, Reddit.com outranked Digg.com in popularity as the world’s most visited social news site.

Steve Huffman and Alexis Ohanian founded Reddit.com and later that year, Christopher Slowe joined the team. They received $100K in funding from Y Combinator, a start-up funding firm. After a year of success, Condé Nast Publications acquired Reddit on October 31st, 2006. However, in July 2010, Reddit was lacking funds to support the explosive growth they were experiencing. To compensate, they began the Reddit Gold program. The program succeeded in getting Reddit the money they needed and they were able to buy more servers and hire more employees.

The features of Reddit are what make it the most popular social news site on the Internet today. Anyone can browse Reddit with or without registering an account on the website. However, to vote on submissions, users must have an account. Also, to submit links to be voted on, a user must have an account. Account holders can create subreddits which are specific categories that they want to see content in. For example, there are subreddits for politics, world news, gaming, technology, etc. Users can subscribe to subreddits anyone has created to see submissions in these categories. You can customize what you see when you log in based on what subreddits you are subscribed to.

Also, users can send messages to each other, comment directly to each other in submission threads, and up-vote or down-vote specific comments in threads. The more up-votes on a user’s links and comments, the higher a user’s karma score (an arbitrary total displayed on their user page). Finally, users can earn awards for a particular achievement based on their activity on Reddit. Trophies are also available as milestones for users’ achievements. Reddit Gold is an optional monthly subscription service for customers that provides benefits like less ads, more customizable home pages, etc.

Alexa ranks Reddit as the 48th most trafficked site in the U.S., and 113th in the world. In November 2009, Reddit moved from physical servers to Amazon Web Services. Specifically they are using Amazon Elastic Block Store (EBS) and Amazon Elastic Compute Cloud (EC2). One of the key benefits of cloud hosting is the ability to rapidly resize resources in the cloud. The rapid resizing makes development easier and more efficient. It also helps business owners by tracking what resources owners are using and only charging them for what was used that month. The additional advantage of a cloud storage system like EBS is the ability to store data separate from the resources you’re running as a cloud user. That way, if traffic decreases and some resources are dropped because they’re not needed, all the storage is safe in another location (and still accessible to all running resources).

Reddit is the current leading social news website in the world. Hosted through the cloud, it is a dynamic website that allows users to submit their own content and then decide how relevant other users’ content is. The social aspect it provides through inter-website messages and comment threads on submissions helps to create the Reddit community that is so popular with Internet users today.