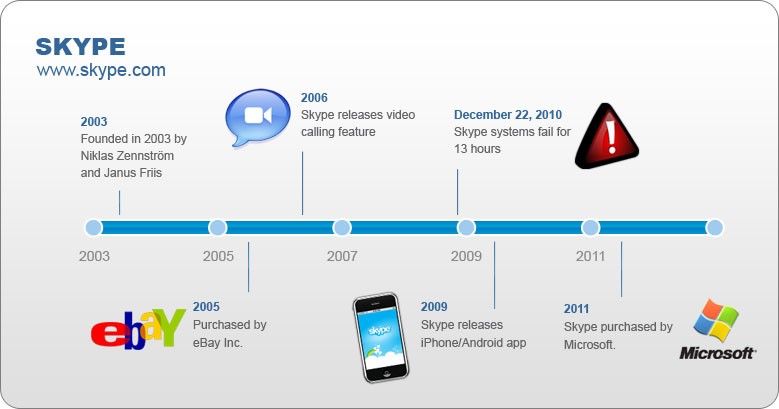 Skype is a downloadable software that lets you call, video chat, and instant message with anyone around the world online.

Founded in 2003, Skype has been, as their mission statement says, “the fabric of real-time communication on the web” for millions across the globe. Based in Luxembourg, Skype runs several facilities located in Europe, the US, and recently in China. Staffed with over 22,000 employees, and recently backed by Microsoft, Skype is on the frontline of peer-to-peer communication.

Skype was originally founded by Niklas Zennstrom and Janus Friis in 2003. Niklas and Janus both co-opted on the website Kazaa, another peer-to-peer communication website where photos, files, and music could be exchanged. The beta version of Skype was launched in August of 2003 and was compatible for Windows, Macintosh, and Linux systems. A version was even released for the Sony PSP. Since then, Skype was made available on the Xbox 360, through Comcast cable services, and cell phones.

The original title for Skype was Sky Peer-to-Peer, but because of the long name, the creators shortened it to Skyper. When it was discovered that the domain Skyper had already been purchased, the “r” was dropped, leaving Skype. Since then, Skype has been coined as a verb, meaning to communicate with someone via Skype software features, i.e. “let’s Skype tonight.”

In 2005, eBay Inc. purchased Skype for US$2.6 billion. Due to difficulties and disagreements between the two companies, eBay announced in April of 2009 it would begin preparations for making Skype an independent company by 2010. During these preparations, an emerging Silicon Valley-based venture capitalist firm, Andreessen & Horowitz, made their first investment to finance Skype. In May 2011, Microsoft purchased Skype for US$8.5 billion.

Skype filed for an IPO with the SEC in August 2010, aiming to go public shortly thereafter. But in October of 2010, Skype CEO Josh Silverman was replaced by Cisco VP Tony Bates. Once Bates took charge, he postponed the IPO date until the second half of 2011 in order to become more acquainted with the company. So far, Skype has yet to enter the stock market.

Skype is a downloadable software client that is compatible for most platforms. It allows people to communicate with each other through voice, video, and instant messages over the Internet. This technology is typically referred to as Voice Over IP or VoIP.

Since its beta release, Skype has not stopped developing new applications and features. Starting out primarily with voice calls, much like a standard telephone, Skype released a video conferencing option in January 2006. This feature has quickly gained popularity and its quality currently rivals sites dedicated entirely to video conferencing. In August of 2011, Skype’s purchase of the young startup website GroupMe enabled it to offer instant messaging to its users. Using technology from the Kazaa project, Skype is also equipped for online file transfers.

Skype has also entered the mobile market with apps on the Android Market and in the Apple Store for the iPhone and iPad. Skype continues to produce updates, some of which allow users to make video calls in HD, use a phone’s 3G network to connect, and talk with 4 people at a time.

Skype has over 700 million registered users. There are over 300 million minutes of video calls every day worldwide and over 1.8 billion video calls are made per year. Most of the traffic is on Sunday and 58% of Skype use is audio conversations and 42% is video. The site ranking is difficult to determine since Skype is a client-based service, but Alexa ranks Skype as #166 most trafficked website globally and #222 in the US.

Skype employs a “hybrid peer-to-peer (P2P)” network. Traditional client/server networks, such as AOL Instant Messenger, connect their customers to a company’s server before connecting them to other users.

There are 3 components to a hybrid P2P network: Nodes, supernodes, and the servers.

To illustrate how the Skype network functions, we’ll use an example of node 1 in Mesa, Arizona who is “Skyping” her husband, node 2, who is on a business trip in Tallahassee, Florida. Because nodes can’t communicate with each other directly due to firewalls, the caller is connected with a supernode first. The supernode acts as an operator, directing node 1’s call to node 2. After the connection is made, node 1 can talk to node 2 for any length of time.

Outside of the firewall, there are thousands of supernodes connecting calls globally. These supernodes connect with each other creating an extensive database which can, theoretically, connect any call around the world. This supernode network is called a cloud.

The supernode cloud is supposed to be “self-healing,” meaning that if one supernode goes down, users can connect to another supernode. The Skype node network acts as both a client and a server. It acts as a client by drawing its resources from other peers and a server by providing resources to others. As Skype acquires more users, it receives that much more computing power. This method allows Skype to supply a massive and growing customer pool while remaining cost effective.

Released in 2003, Skype went from a fancy novelty online to a mainstream form of communication. Steve Ballmer, Microsoft CEO, states that Skype is paving the way to “the future of real-time communications so people can easily stay connected to family, friends, clients and colleagues anywhere in the world.” Thanks to its extremely innovative system, our friends and family are closer and this world is even smaller.