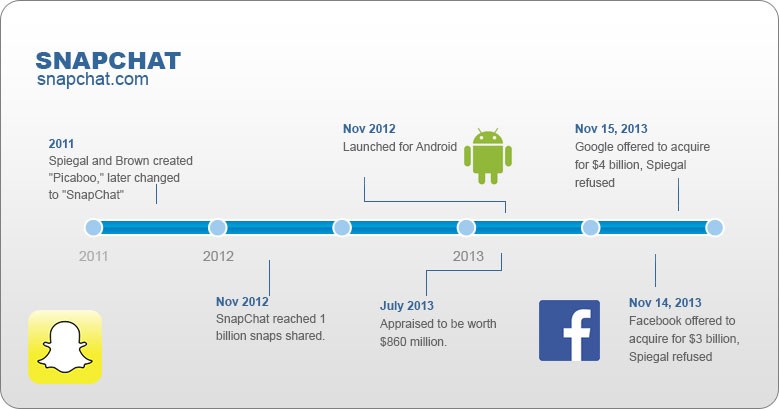 Bandwidth (Why Medium?): Although over 400 million Snaps are sent each day and they are entirely images or videos, they are small and low-quality. This means that not very much data is transferred over each day. However, it is still medium because of how many people use SnapChat on a daily basis.

Disk (Why Medium?): Despite some pushback on the issue from users, SnapChat actually saves all of the snaps sent in its database. This was brought to light recently when hackers were able to obtain the usernames and phone numbers of 4.6 million users. With the number of snaps sent each day having steadily grown since SnapChat’s inception two years ago, this adds up to a huge number of snaps stored in the database.

CPU (Why Low?): SnapChat has very few functions beyond its purpose: you can search for friends, but you cannot search through hashtags, random users, or a collection of images or videos. Once you find friends, snaps go back and forth, but nowhere else.

RAM (Why Low?): Again, there is next to nothing that users are searching for. Friends are generally accessed through the user’s smart phone contacts list. Users can search for friends with their usernames, but that requires minimal RAM.

Scalability (Why High?): Although SnapChat has become very popular very quickly, there is no evidence that usage goes up over holidays or during specific seasons. SnapChat only needs to keep up with the rising tide of new users.

SnapChat is an app available to smart phone users. Users take pictures or videos, caption them, or add doodles, then send the image to selected or individual friends. The primary difference between SnapChat and other photo and video-sharing apps is that the image will be unavailable to open again after the recipient has viewed it for a certain number of seconds. SnapChat is primarily used to take and send “selfies,” or portrait pictures of oneself; the primary demographic is Americans between the ages of 13-23.

Two Stanford University students, Reggie Brown and Evan Spiegal, created SnapChat in 2011, though the original name was “Picaboo.” Spiegal recalls that his product design class, whom he originally presented the idea to, thought that SnapChat was a terrible idea, and called instead for permanent pictures. However, Spiegal wanted to make communication fun again, saying that his friends weren’t able reveal their “weirdness” on other social media outlets. The two launched the app in Spiegal’s father’s living room in Los Angeles.

SnapChat quickly took off – by November 28, 2012, users had shared over a billion photographs, with 20 million being shared each day. SnapChat’s popularity escalated so quickly that the 4-man company experienced scalability issues, causing upload fails and dissatisfaction among users. However, this didn’t do much to deter users from SnapChat, especially as the app was launched for Android on November 29, 2012.

Since its conception, SnapChat has been the source of much controversy. Due in a large part to sensationalism, the app has a well-known reputation for “sexting,” or sending nude selfies. The temporary nature of the pictures and the feature that tells senders when the recipient has taken a screenshot facilitates the ability for users to sext on this app. This was especially scandalous because most SnapChat users are minors; in one case, 10 adolescent Canadian boys were charged with possession and distribution of child pornography after they swapped pictures of their girlfriends through SnapChat. The teens were released to their parents’ custody. Despite a few admittedly dramatic instances, market research firm Survata found through a survey that cell phone users were more likely to use SMS for sexting than SnapChat.

In October of 2012, SnapChat had yet to make any revenue. Since that time, the company has obtained funding from various sources. In July, 2013, the company was appraised at $860 million. On November, 14, 2013, Facebook attempted to acquire SnapChat for $3 billion in cash, but Spiegal declined. The very next day, Google offered them $4 billion, and again, Spiegal refused.

The current number of SnapChat users is 4.6 million.

After capturing a picture or video, users can add captions and doodles to the image. They have the option of sharing the finished product with selected friends, or adding it to their “story line” or profile, which allows any friend of the user to see the image as many times as they’d like within a 24-hour period. The sender can choose how many seconds the recipient can see the picture for. The user interface of SnapChat is intentionally juvenile and simple to make it accessible for all users. Obviously, the app does not need complex or involved features to appeal to users.

SnapChat shares its IP address with close to 500 other websites, meaning that it uses shared hosting. It is estimated that SnapChat has one server. The company hosts with Google’s App Engine, a cloud-computing platform housed in Google’s data centers. Cloud hosting is excellent for apps like SnapChat that need high scalability.