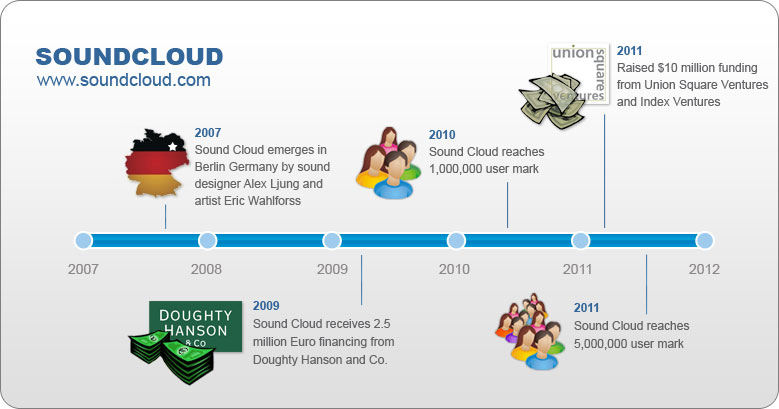 SoundCloud is quickly becoming the musician’s venue of choice for instant artistic collaboration, helping millions of artists and music lovers promote, distribute, and create their own music via the cloud.

Emerging in 2007 as a social networking site devoted entirely to the sharing of music, SoundCloud has fast become the go-to site for millions of musicians and music lovers looking for a way to easily share and collaborate on music through the Internet.

Before 2007 and the invention of SoundCloud, it was difficult to send or receive large music files over the Internet. Co-founder, Alex Ljung related his frustration to Wired magazine, stating that he wanted a site that was to music what Flickr was to photos and Vimeo was to videos. The web was missing a social platform that would allow musicians to easily share their music, so he and Eric Wahlforss filled that space with SoundCloud. Later, they added features to facilitate feedback and strengthen the collaboration and music-creation aspect of the site even further.

Only a few months after its creation, SoundCloud rivaled Myspace’s dominance as an audio sharing platform. In 2009, SoundCloud received 2.5 million euros from Doughty Hanson and Co., a British investment company, allowing them to expand to one million subscribers by May of 2010. The founders went on to raise an additional $10 million from Union Square Ventures and Index Ventures, and by June 2011, SoundCloud had reached 5 million users.

The goal of SoundCloud is to create the ultimate sound sharing and creating experience. As a subscriber, you can upload your original tracks to the SoundCloud interface as well as use its features to record your music. Additionally, SoundCloud has hundreds of compatible apps to enhance your recording and production experience.

After creating an account, you can follow your friends, listen to their tracks, and tell them what you think. Your personal uploads and recordings are saved to your profile, where you can share information about yourself, your music, or anything else that interests you. Users interact with each other through their profiles by making general comments, or by commenting on specific audio files. There is even the option to comment on specific moments during the playback of any recording, giving the musician a better, more accurate critique of their music.

Another key feature of SoundCloud is its optional integration with Facebook and Twitter and the ability to store files with unique URLs, making it very simple to share your music, as well as feedback, on other social networks as well.

SoundCloud is ranked as the 313th most trafficked site in the U.S., and 366th in the world by Alexa. The website is hosted by Atom86, an Amsterdam-based hosting company.

In the beginning, SoundCloud used Sun Solaris-based servers, which are known for their ability to scale and accommodate large and growing data sets. Afterwards, it switched to using Nginx. Nginx web servers can run on most operating systems and deliver fixed content at high speeds, with efficient use of the system’s resources. These web servers are often used as a faster replacement for Apache (which is typically run in Unix based environments). Their purpose is to provide higher throughput for heavy content sites by eliminating unneeded features of a typical Unix platform, which in turn improves the performance of the specific website it’s molded for.

Created in 2007, SoundCloud is now the leader in original music sharing and sound social networking. Because it’s hosted by Atom86, and is using Nginx, SoundCloud provides a fast and easy way to upload or record music, interact with other users, and share your creations via other social networks. You can listen to your favorite artist’s new creations, or record some new mixes you made. Whether listening and recording, or just browsing and commenting, it’s all possible with SoundCloud.