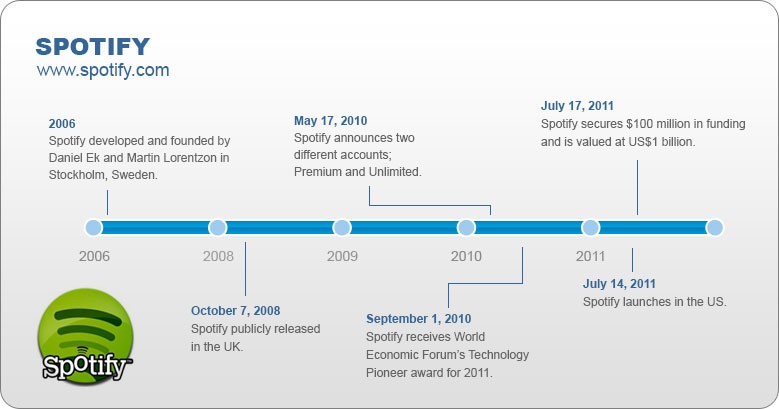 Spotify is a client-based music streaming site, offering over 10 million tracks to 15 different countries including the US.

Spotify is a music streaming service offered on a downloadable client and mobile app. Marketing over 10 million tracks, including the most popular music from big name record labels in the music industry, Spotify has made its unique name as one of the most widely used streaming services in the world. It offers a unique approach to music streaming by integrating a basic peer-to-peer distribution and a clever integration to the Facebook network.

Spotify was founded in 2006 by Daniel Ek and Martin Lorentzon in Stockholm, Sweden. Daniel Ek was formerly the CTO of Stardoll and Martin Lorentzon was the co-founder of TradeDoubler. As the company grew, the headquarters were eventually moved over to London, England while the offices in Sweden became in charge of research and development.

Until October 2008, Spotify was on an invite only basis, although both free subscriptions and paid accounts were available. This was to help manage the server load as well as help cut costs on the licensing fees. In February 2009, Spotify began offering free, but limited, access to its services, starting off in the UK. Due to an influx of free users, Spotify decided to shut down the open registrations in the UK on September 11, 2009. On June 17, 2011 Spotify reported having received another $100 million of funding which it used to support its US launch, occurring on July 14, 2011. Since then, the free access has been restarted and is available in fifteen countries.

The name Spotify comes from Daniel Ek and Martin Lorentzon’s brain storming session. They were trying to find an original name with no hits on Google. Martin shouted out a name and Daniel mistook what he heard for the word “Spotify.” When searching Google, they found no hits and the brain child was given a name. To give the name some meaning, they maintain “Spotify” means to spot and identify.

Spotify is a very basic and user-friendly platform. The service is only available as a client on personal computers or as an app on mobile devices. The client functions on Mac and Windows products and the app is offered for all mobile platforms. To access the client, Spotify has partnered with Facebook for verification. It also allows users to post on their profiles what tracks they have listened to that day and users can also see what their friends are listening to with a ticker located on the right side of the client.

Users can search for artists and tracks in a search bar, assign those tracks to playlists or add them to their library. Like Pandora, users can also use the tracks they have downloaded to their account to start a radio station which plays tracks similar or of the same genre. Users also have the option to vote the track up or down using the same thumb icons as other music streaming sites.

Spotify is noted for offering almost instantaneous playback of their offered songs with little to no latency. Its architecture is a very basic hybrid, combining basic P2P schematics with streaming from a larger database directly.

Spotify saves its over 10 million tracks of music in a master storage facility of over 290TB. Those songs are distributed to one of two production storage facilities located in London, England or Stockholm, Sweden. Each facility containing about 2.4 million tracks. The music is then shared to the clients where, when played, will usually save the song to individual computers as a cached copy.

The P2P network functions like most other P2P networks. In order to minimize the impact of sharing tracks between users, only about 15 seconds of one song are shared by multiple peers who have that particular track cached on their computers. Mobile devices are not included in the P2P network. Since the music is provided by Spotify and can only be played using the client, it is not considered an illegal pirate file sharing network.

Spotify is one of the most popular music streaming service. Offering its downloadable client and integration with the Facebook network, it also offers a legal alternative to file sharing. Containing over 10 million tracks and being used by even more millions of people, Spotify is further evidence that the future of music listening experiences is moving towards online streaming.

“History of Spotify.” It All Makes Sense.