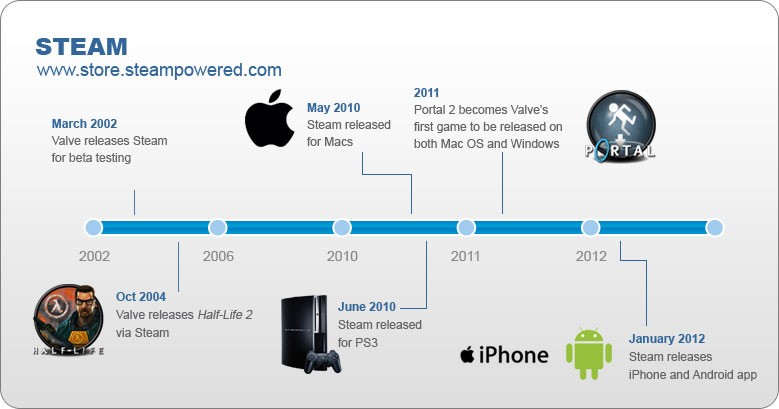 With over 1,800 game titles and serving over 780 petabytes of data to its 40 million users, Steam is clearly the gamer’s new best friend.

Steam is an online distributor of games and game-related media. Users can use Steam to purchase computer games and download them without a physical disk. Created and managed by Valve Corporation, Steam has grown into one of the largest providers of computer games for independent studios such as Supergiant Games and big named titles like Activision.

As Counter-Strike climbed up the popularity charts, Valve ran into problems when it tried to install new patches, which would take the game offline for days at a time. Valve began to consider building a gaming platform which could deploy patches and updates automatically for its online games and could install better anti-cheat and piracy controls.

Steam is Valve’s solution to that problem. It’s difficult to determine when development of Steam software actually began, but it was released on March 22, 2002 for a beta period which attracted between 80,000 and 300,000 testers playing Counter-Strike 1.6. The beta process was a huge success, with the one exception of the servers crashing due to thousands of gamers trying to play Counter-Strike at the same time.

Around 2004, Valve began negotiations with video game studios and signing contracts allowing Steam to actually distribute games. This service became popular once Valve released Half-Life 2, which required a Steam account to play. After a few hiccups with Half-Life 2, including some glitches and hacks, Steam proved itself to be a reliable online distributor of video games.

Originally launched for PC, Steam became available for Mac OS X on May 12, 2010. Valve offered Mac users the option of re-downloading games previously ran on Windows operating systems free of charge. Valve also began releasing Mac-compatible versions of older titles and OpenGL versions of hits such as Team Fortress 2, Portal, and Left 4 Dead 2. Valve has also been rumored to be developing a version compatible with Linux and a gaming console dedicated to Steam. Valve has since denied these claims. However, at the 2010 June Electronic Entertainment Expo, Valve announced Steam would be available for the PlayStation 3 with Portal 2 being the vanguard for many other titles to come.

At its release in 2002, it was estimated that from every US$50 game sold on Steam, Valve received US$30 in profit. Although volume remained higher for sales by retail, Steam trumped sales in profit. By 2007, Steam accounted for 13 million users and 150 games in its catalogue. Now Valve reports having over 40 million Steam users, over 1,800 games in its library, and now sports an iPhone and Android app, released January 26, 2012.

Steam has turned from a gaming platform into a video and computer game distributor. What sets Steam apart from other online gaming providers is the ability to download full video games onto users’ computer hard drives. Just recently, players’ game information was made interchangeable between PS3 gameplay and personal computers.

The library of games available is expansive and ranges from less mainstream games, such as Bastion, to the most popular games, such as Call of Duty: Modern Warfare 3 or Skyrim. Users first create a personal profile, purchase the game online, download the game to their own computers or PS3, and are able to play without using a disc. Steam also gives gamers the option of using CD keys from retail boxed games on the Steam website to transfer games onto their Steam account.

Users can also login to their profiles on other computers and download purchased games onto that hard drive. Steam allows you to log into your account on other computers and access games an unlimited amount of times. Through the same profiles, gamers can interact with each other through gameplay and the provided instant messaging service and VoIP feature. The profiles also contain player statistics and achievements which are open for friends of players to see.

Steam doesn’t disclose too much information about its server architecture, but they do boast about providing each of the millions of gamers with 80 petabytes per year. This is made possible by its 66 worldwide data centers and over 200 content servers with “24x7x365 operation staff” monitoring those servers.

Users are also able to access the Steam Cloud, a service which acts as a dedicated server for individual players. On this server, players can save modifications and changes to most games. Depending on the game, users can save keyboard shortcut settings, game profiles, and game saves onto this server.

In order to decrease the file size and limit fragmentation, Steam stores its games as .gcf files (Game Cache Files). Steam still uses space on the user’s hard drive to store the game, but as a .gcf file, the game is much more portable and compact, doesn’t fragment, is easily modifiable, and won’t override valuable data.

Available in over 22 languages including Romanian and Thai, Steam now owns 70% share of the video games distribution market in multiple currencies. This online game distributor has become the go-to site for gamers across the world. And with EA Origin emerging on the same market, Steam will only become even more competitive.