Note: With the advent of cloud computing, more and more Internet companies are getting hosting services from a wider variety of places. Try NetHosting’s cloud hosting today for a great price and unbeatable service.

Intel sales indicate that instead of the big three making up most of their business, the chip maker sells its products to a wider variety of companies.

Intel is one of the biggest processor manufacturers in the world, which is why it has the cold hard data about which server companies are declining based on reduced processor orders. Head of Intel’s data center group Diane Bryant says that the server giants that always come to mind first, Dell, HP, and IBM, may no longer be the big three based on Intel’s sales figures. 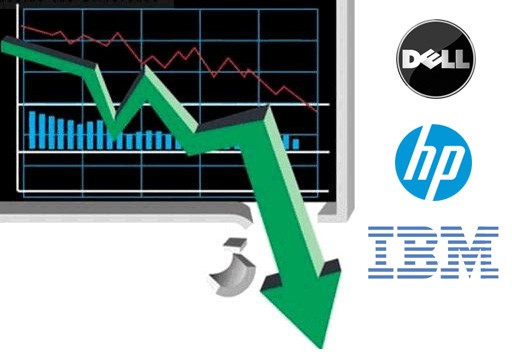 Four years ago in 2008, Bryant recalls the big three (HP, Dell, and IBM) buying the vast majority of the chips that the company sold. Seventy-five percent of Intel’s revenue that year was from selling processors to those companies. Now however, everything has changed, says Bryant. Eight server makers now comprise three-quarters of Intel’s processor sales. One of those eight is Google, which doesn’t even sell the servers it makes; it creates them for internal uses.

About ten years ago, Google decided to experiment with building its own servers and data centers to save money and time. Time has shown that the decision was a wise one, as Google has grown exponentially in the past ten years and the company’s revenue has increased in leaps and bounds. Google started the movement and other companies began following suit, drawing business away from the likes of HP, Dell, and IBM. Additionally, more and more companies (like Facebook and Amazon) are buying servers directly from original design manufacturers (ODMs) in Asia, which also saves time and money. Some of those ODMs also provide hardware for HP and Dell, and are getting the same business without having to deal with the middlemen.

More than ever before, Chinese server makers like Huawei are factoring into the worldwide server market in a big way. ODMs like Quanta and SuperMicro have the same story. In fact, the ODM Wistron now has a U.S. subsidiary called Wiwynn specifically so server buyers in the United States have an easier way to buy servers from manufacturers directly.

For the majority of the past four years, Diane Bryant has actually been working as the CIO of Intel, but in January of this year, she went back to heading up the data center team as vice president and general manager. Originally, the group was called the server group, but in Bryant’s absence, the name was changed to the data center and connected systems group. Now they didn’t handle just server chips but storage and networking devices as well. And of course, as previously mentioned, the biggest change was that HP, Dell, and IBM were no longer the major players in chip sales.

Note: More and more hosting companies are cropping up, but not all of them have secure and stable data centers. Take a virtual tour of the NetHosting data center to confirm our dedication to your privacy and security.

Despite Intel’s numbers, an HP representative commented and said that the research firm IDC collected server stats that put IBM, Dell, and HP combined at 73.9 percent of the server market. The edge that sales figures from Intel have is that they give a limited glimpse at Google’s activities (which are very well hidden), and Intel also sells chips to ODMs which IDC’s numbers don’t account for. No matter whose numbers are right and whose are wrong, the big three are certainly working hard to reinvent their businesses. Dell has a new business branch (Dell Data Center Services) dedicated only to building custom servers for big web companies. All three are starting to offer cloud services now as well. It seems like too little, too late, but time will tell if any of the big three can bounce back to be a top dog once again.

To read more about HP’s attempt to bounce back and be competitive in the changing hosting market, check out our blog post about HP laying off a sizable percentage of its employees to make way for a new cloud computing focus at the company.