Note: The AWS cloud worked for NASA on Sunday night, but cloud computing is such that it can be implemented in any company’s data center. Try cloud hosting with NetHosting today to get the same great flexibility and reliability that NASA did.

NASA knew the Mars Rover Curiosity landing was going to draw a crowd, so the organization tested its servers to ensure they could withstand the load.

As the whole nation has already heard and been talking about for days now, the latest Mars rover from NASA named Curiosity successfully landed on the surface of the Red Planet on Sunday night. Naturally the interest in seeing an event like this happen live was huge, so NASA partnered with an application-testing specialist called SOASTA to live stream the control room Sunday night. 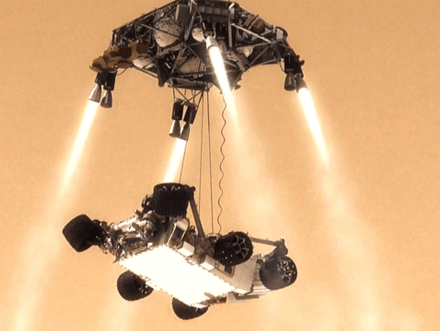 The company SOASTA primarily tests the traffic load apps can handle by creating cloud computing-based resources that imitate the traffic that millions of actual real world users, simultaneously, would generate. Recent work from the company has included London2012.com, the official Olympics website that many have predicted will receive over a billion visitors by the time the Olympics is said and done this year.

NASA and SOASTA decided to use Amazon Web Services cloud to stream the event and they used a particular method of stress testing prior to the big night, to see if the AWS servers could withstand the load. First, the companies built a single origin server (a Mac Pro that was in NASA’s Jet Propulsion Laboratory) which served four bitrates (250, 500, 750, and 1,000) to one Flash Media Server. The output of that was cached by a tier-one Nginx server, and was fronted by forty tier-two load balanced Nginx servers that were running on top of Amazon EC2.

Next, SOASTA created load from six Amazon EC2 regions all over the globe, which totaled to over twenty-five Gbps of network traffic, which kept up for over forty minutes. The first twenty of those forty minutes, SOASTA shut down ten instances just to see if the stack and Amazon’s cloud could keep things running in spite of those failures. The shut downs did reduce the traffic that the system could handle, but Amazon’s Elastic Load Balancer got those ten down instances back up and supporting twenty-five Gbps within five minutes.

Note: Don’t let heavy traffic push your server around. You might experience the problem of bandwidth-greedy neighbors with other shared hosting solutions but with NetHosting’s Cloud Virtual Hosting service, CloudLinux keeps you up and running despite your server neighbors.

After that, the SOASTA and NASA team shut down twenty instances. The remaining servers’ traffic handling rate went down to twelve Gbps and at this point servers started displaying that they were being overloaded. Again, Amazon’s Elastic Load Balancer brought back up the downed instances and again, traffic returned to the twenty-five Gbps rate. In the total forty minutes, the load-testing servers downloaded sixty-eight TB of video from NASA’s cache.

At the end of the day, NASA and SOASTA released the following statement: “Load on the primary FMS server and the tier 1 cache remained very low for the entirety of the test; we should have no problem running dozens of stacks during the live event. Anecdotal evaluation of the NASA live stream during testing showed no buffering or bitrate drops. We are confident that the results of this test suggest that an aggregate of these stacks will be able to deliver the required streaming delivery for the Curiosity landing event.” And of course, now that the event has taken place, we can observe that they were successful – live streaming went smoothly during the whole landing process.

Load testing might seem like a dull part of computing, but in reality it’s one of the most important things that companies with lots of client-crucial data can do. Being able to even perform these kinds of scalable stress tests is a huge unsung benefit to cloud computing. On top of that, the cost for this kind of stress testing is low, and saves money in the future by preventing down time when traffic unexpectedly spikes.

To read more about the importance that big companies put on load testing servers, check out our blog post about Netflix’s server-testing software, Chaos Monkey.