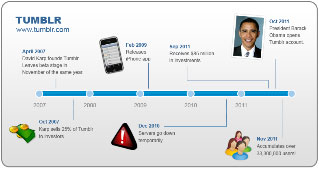 Tumblr is the iconic tumblelog for microblogging. With 500 million page views per day, Tumblr is a booming social site that is here to stay.

Tumblr is a platform for a type of blogging called "tumblelogging," which is essentially small blurbs of texts, images, and other media posts organized into a newsfeed format, like a list "tumbling" down the screen. Tumblr makes blogging simpler and quicker, allowing users to frequently post brief thoughts and even pull things from other sites. As one of the biggest online startup companies from the East Coast, Tumblr has now become an iconic name in the blogosphere.

Tumblr was founded by David Karp in April of 2007, when he was only nineteen. David explains that the term "tumblelog" was entering the lexicon and he found the idea of microblogging fascinating. He eagerly waited for a blogging platform entirely dedicated to this unique form of online expression, but after a year of waiting, the online design prodigy decided to make his own.

Tumblr made a huge splash online. Within the first two weeks of its emergence, it enlisted over 75,000 "Tumblrs." Seeing the potential of this project, David sold 25% of his budding startup company to investors, including venture capital firms such as Spark Capital and Union Square Ventures. Vimeo's Jakob Lodwick and Betawork's John Borthwick also pitched in some money. After just six months of its creation, Tumblr was worth US$3 million. Shortly after receiving this financing, Tumblr left the beta stage in November of 2007.

Since then, Tumblr has accumulated over 33 million users, over 18 billion posts, and over 46 million blogs. Tumblr has attracted the attention of professional athletes, celebrities, and even world leaders. In October 2011, President Barack Obama's campaign created an account just a year before the October 2012 election.

Tumblr officially released its iPhone app in February of 2009 and continues to increase in value and reach. After the September 2011 investment circuit, this now well established social media startup website raked in over US$85 million, launching its value to US$800 million. Tumblr is still based in New York City and now employs 91 workers with the mission to "build the perfect platform for self-expression."

Tumblr has two primary functions: microblogging and reblogging. These two components are what comprise its tumblelog platform. Tumblr displays users' content on a dashboard which is very similar to Twitter's newsfeed format. The dashboard is famous for its clean and modern look. The blog feature has a completely customizable template and users can either choose from provided themes or purchase themes from designers.

Microblogging means to share a low concentration of information such as clips of videos, short blurbs of texts, popular memes, pictures, links, etc. While a blog is typically like a journal with complete ideas or certain themes, Tumblr is for expressing what is at the top of a user's mind.

Reblogging is what makes Tumblr so widely used. Reblogging means to take something from another website (an article, photo, etc.) and link it or embed it onto the user's personal Tumblr account. The process of reblogging is made user-friendly by the spreading of the "bookmarklet" option around the web. If a user wanted to share this case study for example, all he or she would have to do is go to the top of the page, click the "share" button next to the other social media links, scroll down to the end of the list, and click on the Tumblr icon. Using his or her own personal account, the user can then link this case study to his or her account. Tumblr facilitates reblogging even further by placing large buttons at the top of a user's dashboard, letting users quickly insert text, photos, quotes, links, chat sessions, audio clips, and video clips. Tumblr even formats that content for users.

The Tumblr system is currently in an interesting position. While experiencing massive growth, it runs its operations still from one colocation site. There are reports that Tumblr has leased space from Amazon's S3 Clusters for backup, but most of the data is still stored at the one data center containing little over 1,000 servers.

Ranked number 22 in the nation by Alexa, Tumblr receives 15 billion page views per month, 500 million page views per day, 40k requests per second, and collects 3TB of new data a day. The server engineers at Tumblr have developed a server architecture which stores its data and powers its website as efficiently as possible.

Tumblr began using a large LAMP application, which is a mixed software bundle of Linux OS, Apache HTTP Server, MySQL database software, and PHP. It wasn't until 2010 that Tumblr moved towards a distributed service model with sections built around software, such as Scal, Redis, Kafka, Finagle, and HBase. This model is fairly intricate and detailed, but we'll look primarily at how Tumblr's dashboard is powered and how it uses Finagle and Kafka.

The dashboard is powered by a cell base similar to the cell architecture of the Facebook Messages inboxes. The cell is self-contained and holds all the data for multiple users. Each has an HBase cluster, service cluster, and Redis caching cluster.

Tumblr uses Finagle as its primary indexing software. This helps display excerpts of messages on the dashboard and when clicked upon, lead the viewer to the full text. Kafka is used to ensure that viewers aren't seeing any duplicate data within the site. Kafka allows users to run parallel of each other without having to create multiple sets of data to display to multiple viewers.

Launched in 2007 as David Karp's ingenious brainchild, Tumblr has now become the mascot of tumblelogging. Garnering 500 million page views a day, this small online startup has attracted bloggers from amateur writers to famous celebrities to world leaders. Tumblr has transformed the blogosphere by integrating this unique form of expression into mainstream society.