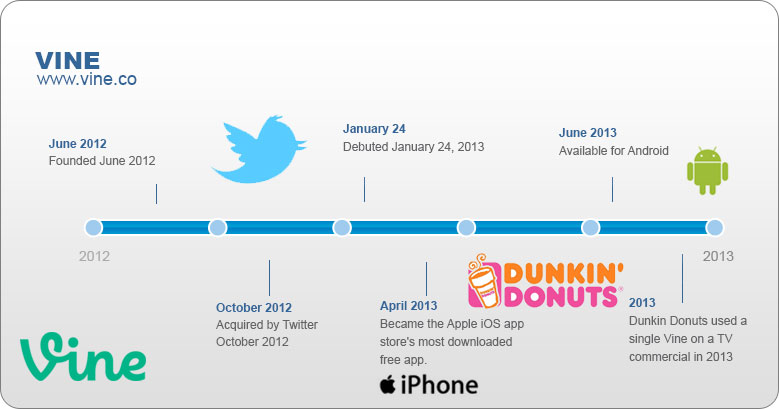 Bandwidth (Why Medium?): Vine has an even more limited functionality than Instagram.It does qualify as social media because you can (“like”), comment, and “re-Vine” (share). But it does not allow you to post static images and can only apply minimal images. However, the bandwidth is “medium” because videos require more than text.

Disk (Why Medium?): Vine has to store 6-second videos from 13 million users. Although the videos are relativity short, they still need more storage space than most other kinds of files.

CPU (Why Low?): The app has very few functions available to the user. It’s possible to search through tags, popular Vines, and categories, as well as many of the social media actions. However, Vine doesn’t need very much CPU to complete those few tasks.

RAM (Why Low?): The search abilities for Vine are also limited. Again, users only need to search through videos. With only one type of information to search through, Vine probably has low RAM.

Scalability (Why High?): Vine is a relatively new app, but still very popular – users are constantly on the rise. Because Vine is less than two years old, it is difficult to tell this early if traffic spikes during certain seasons or events. However, with new accounts forming regularly, scalability needs to be high.

Vine is a smart phone app that helps users create 6-second looped videos. Users can share the videos, follow other users, comment, and “re-Vine.” This social media app fosters a more artistic approach to image-sharing; users have brought back the trend of stop motion animation, thanks to the ability Vine has of pausing while filming. Vine is currently owned by Twitter, and users frequently tweet videos after posting. Currently, the app has 13 million users across iOS smart phones, Androids, and Windows products.

The video-sharing app is relatively new; it was founded in June of 2012. By October of the same year, Twitter acquired the start-up company. Although the app began on iOS products, it later branched out to Androids and Windows products. On April 9, 2013, Vine became the iOS App Store’s most down-loaded free app.

Since its conception, brands, journalists, artists, celebrities, and lay users have taken advantage of Vine. In February of 2013, a Turkish journalist used the app to record the scene after a suicide bombing had taken place near the US Embassy in Turkey. Fast food chain Dunkin’ Donuts used a single Vine as a TV commercial in September. Columbia Records used a Vine to showcase the band Big Time Rush’s upcoming album.

After users create their videos, they can share them to different Vine “channels” based on category and content. A “Sessions” feature allows the user to film parts of the video, leave it, and then come back later to film more. With the “Time Travel” feature, users can edit the video before sharing, replacing parts of it with clips from previous filming or other sources. The “Ghost” button puts transparent frames from the previous shot into the current one.

Twitter currently hosts with NTT America Enterprise Hosting Services. It’s possible that Vine uses the same hosting provider; however, we know that Vine was affected when Amazon’s EC2 data center in Virginia experienced technical difficulties earlier this year. Vine, along with Instagram and Netflix, was down for about an hour. Vine is estimated to use 5 dedicated servers, using about 149.794 GB a day. Amazon’s EC2 center is used mainly for cloud hosting, and large cloud hosting services can sometimes be unreliable.