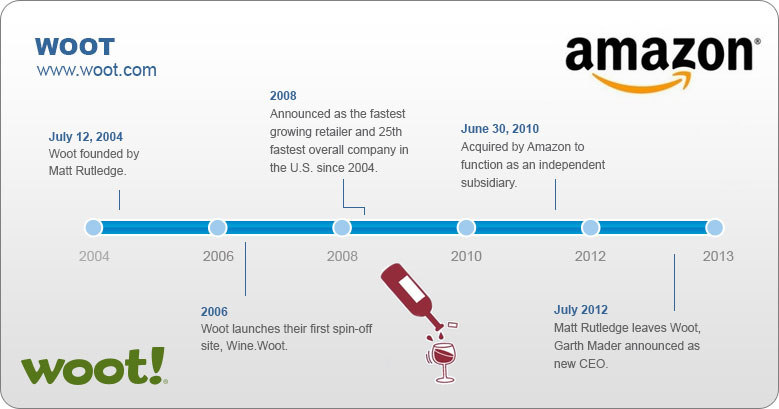 Bandwidth (Why Medium?): At certain times, Woot receives a ton of traffic. During a sale, they once had 3.1 million buy requests and sold out in 8 seconds. These occasions require high bandwidth, but normally they use much less.

CPU (Why Low?): Since Woot’s business model offers one main product per day, customers don’t need to search long or input many queries.

Disk (Why Medium?): They use disk space to store user information for many thousands of customers. However, they don’t have many products, so they only need medium disk space.

RAM (Why Low?): Other giant E-retailers, such as Ideeli or Amazon, need to provide a seamless shopping experience as consumers browse their vast selection. However, with Woot’s small selection of products, comparatively little RAM is needed for browsing.

Scalability (Why High?): They utilize cloud hosting through Amazon Web Services, which allows for easy scalability. Also, they use RightScale which makes managing their cloud use much more automated. These two aspects allow for high scalability.

Woot Services LLC is a large E-retailer that is generally considered the pioneer of the “one day, one item” sale. Their roots were in selling discounted technology products, they have since branched out to offer products from other categories. In order to keep up with other Internet giants who have mimicked their business model, such as Groupon, they have increased their number of products offered on a daily basis.

Woot was founded in July 12, 2004 by Matt Rutledge in Carrolton, Texas. He owned his own electronics distribution business and decided to sell his surplus inventory online. Rutledge is famous for creating Woot’s signature business model of selling only one discounted product.

2 years after their initial launch, Woot began launching spin-off sites to sell other products using their same business model. In 2006, Wine.Woot was launched, closely followed by the now-famous Shirt.Woot in July of 2007. In September of that year, Woot partnered with Yahoo to create Sellout.woot.com. The partnership with Yahoo has since ended, but the Sellout site is still running daily deals.  Some of other spin-off sites include Kids.Woot (2009), Moofi.Woot (2010), Deals.Woot (2011), Home.Woot (2011), Sport.Woot (2012), and Tech.Woot (2012).

In a move announced by their rapping monkey puppet, Woot was acquired by Amazon in 2010 for $110 million. Woot functions as an independent subsidiary and maintains their previous humor, irreverence, and business model.

Every day, at midnight Central time, Woot offers a new deal that lasts for the day or until it sells out. Woot never reveals how many units are left, but the “I Want One” button will start pulsing when a sellout is approaching.

Woot occasionally uses other sales gimmicks, such as Bags o’ Crap, where they sell a bag with random products in it. They do not guarantee the quality of the products, but they often include expensive items. Another feature they employ is called a Woot-Off. During a Woot-Off, orange flashing lights appear on the main page. These immediately follow the sellout of another item and they do not announce the quantity or sequence of items offered during a Woot-Off.

One of Woot’s most defining characteristics is their unreserved humor and sarcasm. They write unique product descriptions for each day’s deal that usually pokes a little fun at the product, Woot itself, or even the consumers who buy it. For example, they list the “First Sucker” (the first buyer) for each Woot deal offered.

At first, Woot stuck with their one-deal-per-day business model, but they have more recently added Woot Plus. Located just below the Woot of the day, Woot Plus offers categories of products for sale. Even though this doesn’t mesh with their normal model, they claim that they are exploring new ways to “bring you more cool stuff.”

Woot is also well known for its community environment. For each product, they feature the best comments made from consumers and display those alongside the product itself. They encourage their users to be funny, and sometimes a little off-color (they say to keep comments PG-13).  Furthermore, their sites Local.Woot and Deals.Woot feature deals (either locally or nationally) brought in by the community. Even these deals aren’t free of the snarky comments characteristic of Woot’s persona.

In order to deal with their large fluctuations in traffic, Woot uses Amazon Web Service’s cloud infrastructure to accommodate easy scalability. In the beginning, it also provided them with a pay-as-you-go structure to avoid huge up-front costs. They also use RightScale as their cloud management platform to automate their scalability. When they need more server space to handle traffic, RightScale helps them deploy the correct number of servers.

In order to better handle immense spikes in traffic, Woot also utilizes aiCache Web Acceleration through Rightscale’s platform. aiCache basically outsources the requests made on their web, application, and database servers. Reducing the strain on their servers effectively reduces the cooling, power, and servers needed to handle their website traffic. Using these aiCache accelerators, Woot.com was able to achieve a caching ratio of 96%, reducing the load on Woot’s data center to barely a trickle.

Ask us about a cloud computing solution we can create just for you and your needs.

Woot introduced one of the more innovative business models in the world of E-commerce, and they remain one of the most relevant “one day, one item” sites today. Their colorful brand has set them apart as one of the most community-friendly atmospheres seen in any business. While they are no longer a new company, they have seen colossal growth over the past eight years and have shown no signs of letting up.