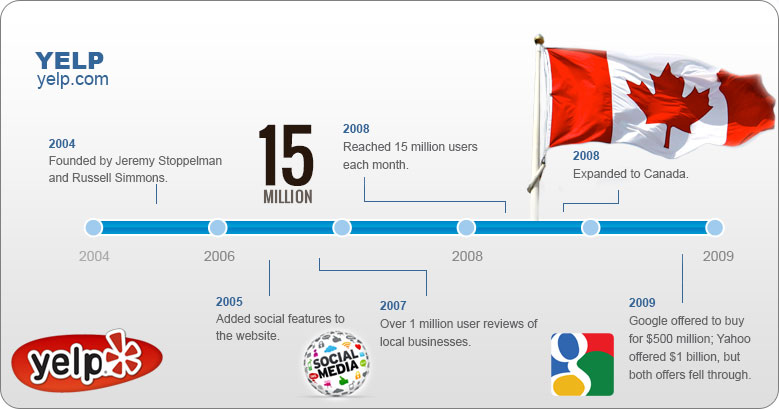 Bandwidth (Why Medium?): Yelp stores a huge amount of information that is added to daily. The website receives over 120 million users each month and is ranked the 30th most popular website in the United States by Alexa – this all amounts to a large amount of traffic looking for ever-changing information. However, the information is all text-based, making the files smaller than videos or images.

Disk (Why Medium?): Yelp’s servers store information on businesses all over the world, as well as user information and the reviews that users create. The website and app also includes social functions as well as event listings.

CPU (Why Medium?): Although Yelp primarily serves as a local business rating site, the social networking functions require a little more from the website, along with the mobile app.

RAM (Why High?): With businesses and reviews from all over the world to search through, Yelp needs a more than average level of RAM. The addition of new reviews, users, and user communications also makes high RAM necessary.

Scalability (Why Low?): Yelp does not experience any sudden spikes in traffic, with the exception of one period in mid-2013. The rate of visitors does not rise seasonally or during holidays. However, traffic does rise steadily in a continuous fashion.

Yelp is a website with an accompanying smart phone app that offers users an “online urban guide.” Users can rate local businesses and leave an online review that is available for other users to view. This information has become very influential for potential customers looking to scope out a new restaurant, store, or service. Yelp also offers a social aspect on its website that allows users to message each other, as well as create lists and view local events.

Yelp was founded in 2004 by Jeremy Stoppelman, the current CEO, and Russell Simmons. The idea was developed from MRL Ventures, a business incubator. Yelp started in San Francisco, but soon moved to New York City, Chicago, and Boston in that same year. Originally, the site was intended be an email exchange service to help users recommend businesses to each other, but the rising popularity of social media at the time inspired them to make the website more social in 2005.

By 2007 Yelp had over 1 million user reviews of local businesses. In 2008, the website hit 15 million visitors per month. Between 2008-2013, Yelp expanded to Canada, the United Kingdom, France, Germany, Spain, Australia, Denmark, Turkey, New Zealand, Brazil, and the Czech Republic. By 2013, the website had over 120 million unique visitors each month.

In 2009, Google offered to buy Yelp for more than $500 million. Although the two companies entered into negotiations, it was put to a halt when Yahoo offered Yelp $1 billion. However, the acquisition did not go through with either company.

Yelp has had its share of controversy. In September of 2011, Yelp claimed that Google favored its own business review service, Google Places, over Yelp’s. Yelp itself was the subject of accusations when multiple businesses complained that Yelp’s advertising program unfairly manipulated reviews and their placements. In 2010, ten different businesses filed a class-action lawsuit against Yelp, claiming that the company deleted or suppressed bad reviews for companies that had paid for advertising. Yelp combatted the issue by hosting town hall style meetings with local businesses to clear up misconceptions. The review website maintains the ability to filter reviews that it believes are false or inappropriate.

Yelp allows users to rate and review local businesses. Businesses can set up accounts that make their company look more legitimate and gives them control over the flow of information regarding the business (such as contact information), but does not give them control over the actual reviews. Yelp includes social features, such as the ability to message other users and a forum for users to ask questions about local venues. Similar to FourSquare, Yelp also rewards frequent users with badges and commendations. It also has a section that will inform you of events happening nearby. The Yelp app for smart phones has the same features as the website.

Yelp houses 32 servers in its San Francisco headquarters. For any business, housing your own servers has risks, including security, scalability, and environmental issues. However, with the exception of one large spike in traffic in mid-2013, Yelp has a very steady rate of visitors coming to its website. Because Yelp’s traffic rises at a steady rate, it can predict how much scalability it needs. We can assume that Yelp has redundant server space. Having dedicated servers also gives Yelp more control over its data.