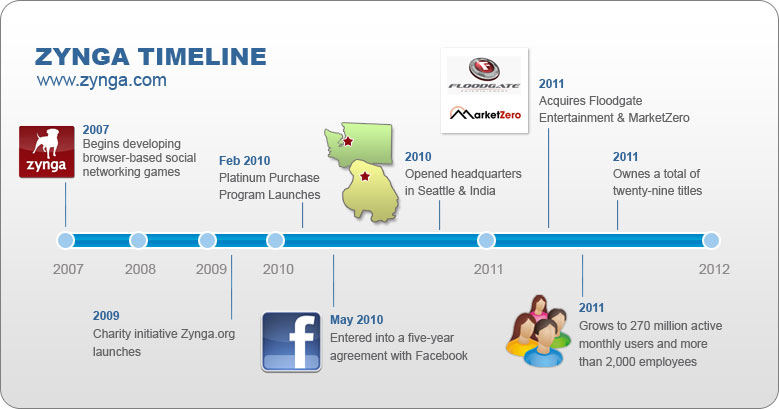 Named for the CEO’s deceased bulldog, Zynga began developing browser-based social networking games in 2007 with the mission to “connect the world through games,” and has since accumulated over 270 million active monthly users and more than 2,000 employees as of June 2011. As Facebook’s largest social games developer, Zynga has attracted a massive audience and generates approximately $850 million in annual revenue. On July 1, 2011, Zynga filed for a $1 billion IPO, seeking a valuation of at least $15 billion.

Founded in January of 2007 by web entrepreneur Mark Pincus, Zynga received initial financing the following year from a number of investors backed by Kleiner Perkins Caufield & Byers in the amount of $29 million.

Strengthened by venture funding, Zynga went on to acquire the booming social network game YoVille as well as accumulate the acquisitions of a total of seven development studios in 2010. In the same year, the San Francisco-based game developer opened headquarters in India and Seattle. Its most recent acquisitions include Floodgate Entertainment in March of 2011 and MarketZero in April of the same year.

As it has morphed into a massive gaming conglomerate, Zynga has faced its share of controversy, including spamming allegations that came to light in 2009 when it was revealed that a 1/3 of the company’s revenue came from lead generation. Additionally, early users were scammed after accepting offers through Zynga’s affiliate ads in exchange for in-game bonuses. Zynga has since made inroads in the way it handles and vets advertisements and other promotional offers that are integrated into its gaming applications.

As of July 2011, it owned a total of twenty-nine titles, but the game developer has also faced and served numerous copyright lawsuits involving allegations that its most popular games either copied existing games or were copied by other developers.

Zynga.org, Zynga’s charity initiative which was begun in 2009, incorporates charitable contributions into virtual purchases within games. Depending on the cause, Zynga.org promotes select virtual goods within games like FarmVille and YoVille and directs the proceeds of purchases to sponsored charities.

Zynga’s revenue relies largely on the sale of virtual goods through its games. Although purchase of in-game goods is not a requirement to play, players can advance in games such as FarmVille by purchasing virtual crops, animals, tools, and even fuel to power those tools, as well as gifts and other novelty goods to send to friends. The market for these goods is so great that Zynga set up a Platinum Purchase Program in 2010 to facilitate three figure purchases from power players.

The premise of every Zynga game is to interact or compete with friends by building and managing the biggest farm, restaurant, fish tank, mafia ring, city, or whatever the game requires. Facebook’s role is to provide the integrated ability for players to notify friends of achievements, give virtual gifts, and recruit in-game help.

At the time of its launch, Zynga’s wildly popular title, FarmVille, was expected to accumulate users at a gradual rate of 200,000 in two months, only to attract 1 million a week. Without the elastic hosting structure of the Cloud, Zynga would have been unable to support so many players with so little notice.

Luckily, in the beginning, Zynga had supplemented the hosting support it currently had in a physical data center with cloud computing reserves by Amazon’s EC2 service. Today, Zynga’s server and networking architecture relies heavily on a cloud-based environment offered and managed by RightScale as part of its efforts to maximize efficiency and minimize maintenance costs. Each of its games are launched initially in the Cloud and then moved in-house when the number of daily players plateaus to a more manageable, predictable frequency.

In the S-1 document Zynga recently filed for its IPO, the company attributes its ability to keep pace with growth to its use of cloud computing and a calculated mixture of traditional data center resources, all linked together with by high-speed networking. As for elasticity, automatic provisioning tools have allowed Zynga to deploy up to 1,000 servers within 24 hours, servicing players with more than a petabyte of content a day, while fluidly navigating system failures, traffic spikes, and other potential interruptions to service.

With automated resource allocation, Zynga has been able to optimize server efficiency by subtracting the human element from the “scaling” equation, reducing administration requirements. Instead of physically monitoring traffic trends to predict and provide for spikes, dynamic auto-scaling does it all in real-time, deploying the necessary cloud instances to keep Zynga’s players connected to their favorite Zynga games.

Arrington, Michael. “Zynga Gunning Up (And Lawyering Up) For War Against Facebook With Zynga Live | TechCrunch.” TechCrunch.
http://techcrunch.com/2010/05/07/zynga-gunning-up-and-lawyering-up-for-war-against-facebook-with-zynga-live/ (accessed November 18, 2011).

“Zynga files to raise up to $1 billion in an IPO.” Renaissance Capital.
http://www.renaissancecapital.com/ipohome/news/Zynga-files-to-raise-up-to-$1-billion-in-an-IPO-9898.html (accessed November 18, 2011).