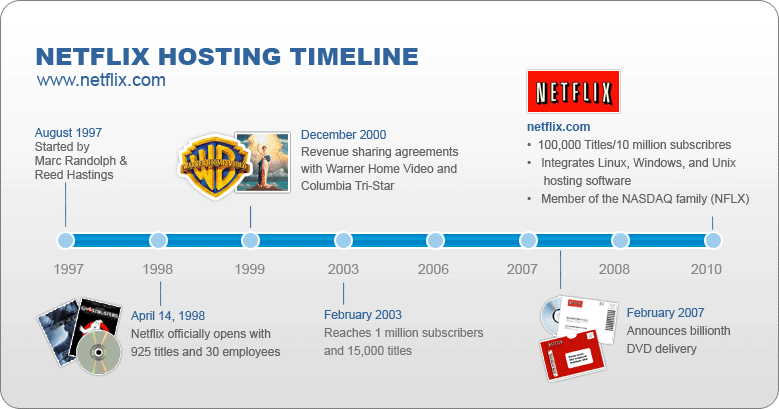 Netflix is the leading website on the Internet to offer a subscription-based rental and video streaming service.

Netflix began in 1997 as an Internet DVD rental company and has since grown into one of the most successful online companies in America. Currently, Netflix is the leading website on the Internet to offer a subscription-based rental and video streaming service.

History
Started in 1997 by Marc Randolph and Reed Hastings, Netflix (originally spelled NetFlix) quickly grew to become one of the largest media-streaming companies in the industry. Both Hastings and Randolph experienced success in the technology market previous to Netflix with the creation of their own respective companies, MicroWarehouse and Pure Software. Netflix officially opened for business in 1998, having only 925 titles to release and 30 employees. After making promotional deals with Toshiba, Sony, Apple, HP, and other companies, Netflix experienced tremendous growth in size and popularity. By 2002, Netflix had 500,000 subscribers and growing competition by similar companies. Its share value fell by half because of this competition, but the company quickly rallied by offering overnight rental delivery and by putting more delivery sites on the map. By 2003, Netflix had reached one million subscribers, a number that continues to grow steadily.

Features
Netflix was originally a DVD rental business, but the company has recently expanded its services to include video streaming and downloads to the subscriber’s computers, TiVo, Xbox, specific LG appliances, and select Blu-Ray disc players. Subscribers can choose from a large variety of movies and TV episodes with Netflix’s Watch Instantly feature or they can browse a broad selection of “rental only” DVDs, which can then be shipped directly to the viewer’s residence. Depending on viewers’ monthly subscription, they are only limited as to how many DVDs they can have out at one time.

As a client of Amazon’s Elastic Compute Cloud service, Netflix relies on the auto-scaling capabilities of the cloud to keep pace with the fluctuating viewership of customers using the instant streaming option. Compared to Netflix’s direct delivery rental service, its Watch Instantly feature is used the most frequently and demands the most processing power. Netflix stopped building data centers in 2009, and complemented their infrastructure with the cloud in order to meet the processing demands of a rapidly burgeoning client base.

Netflix streams video using Windows VC1AP, which encodes at a bitrate of about 2600-3800kbps, depending on which video is being played. As Microsoft’s video format, Windows VC1AP is supported by HD DVDs, Blu-ray, Silverlight, and other platforms.

The codec specification is based on WMV (Windows Media Video) and is a popular alternative to the .mpeg format. Its main use is to support compression of content without converting it to a progressive format. Netflix also uses Apache Tomcat, a servlet container from Sun Microsystems, and the Apache Coyote web server, an http connector. Its platform integrates Linux, Windows, and Unix hosting software with Macintosh and Windows clients. Although parts of its platform are Unix based, Netflix is reluctant to base itself solely on a Linux platform. The Netflix client remains available only on Microsoft Windows and Macintosh platforms, based on Silverlight.

Summary
Netflix is one of the most popular ways to instantly watch videos from the Internet on your own consoles, and the industry leader in DVD rental. Since 1997, it has grown from a small DVD rental site to a successful company of over 10,000,000 subscribers, a member of the NASDAQ family (NFLX), and a multi-billion dollar company.